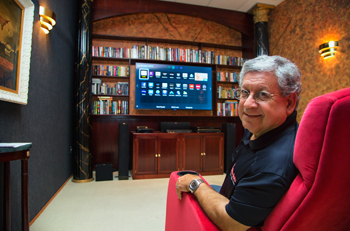 Homeowners who want smart technology are getting more for their money these days as demand increases, says Richard Schmetterer, owner of The Audio Lab, shown in display space at his audio/visual business. (Photo by Chris Brehmer)
Five years ago, a display featuring smart-home technology inside a builder’s design center wouldn’t have made sense, say those in the industry.

“People were afraid of it,” said PJ Kelly, division manager for Logan Homes, which has revamped and expanded its design center in the Waterford business complex. The features highlighted include a panel devoted to the options available for controlling things like the air conditioner and lights from an iPad or iPhone.

Aside from the intimidation factor before iPhones and iPads were invented, prices for the equipment and installation necessary to automate a home are starting to come down, said Seth Coonrod, marketing and sales director for AcoustiCreations, the company that installed the 8-by-8-foot Logan Homes Design Center smart-home display.

“Five, six years ago, you were not seeing smart-home technologies going into houses probably really under $750,000 mark. It just didn’t happen,” Coonrod said.

“I think as people have become familiar with technology, the vendors have said, ‘Ok, let’s get creative, and let’s bring our prices down so it’s available to more people,’” said Coonrod, who admits that it’s part of his job to promote the technology AcoustiCreations sells and installs.

Other professionals in the industry, though, concur.

“No matter what, you’re getting a lot more for your money than you used to – better convenience, better technology for the same or less money,” said Richard Schmetterer, owner of The Audio Lab, a company on Oleander Drive that provides audio and video for homes in the area.

His business has doubled this year, he said, and his company completes installations in new and older homes.

Schmetterer has been in the audio and video industry for nearly 47 years, and he and his wife, Donna, started a CD shop in 1985 before CD stores were more commonplace.

“It takes these manufacturers a few years to recoup their research and development costs, and then prices come down,” said Schmetterer, speaking from the standpoint of the audio and video side of smart-home technology.

Such is the case, Jim Wallace suspects, with smart-home technology.

“It’s kind of like flat-screen TVs. When they first came out, they were very expensive. Now, nearly everyone’s got a flat screen. That’s what’s so great about today’s world. The consumer’s in control,” said Wallace, founder and CEO of Intracoastal Realty.

He said Spartina, the townhome development his company is building off Wrightsville Avenue, is expected to offer a menu of smart-home options to buyers and renters, who will likely begin moving in by April 2015. But Spartina is described as consisting of “luxury” townhomes.

At Logan Homes, basic packages from AcoustiCreations will cost homeowners between $4,500 and $5,000, Coonrod and Kelly said. They can later add to what they want automated, such as additional lights and HVAC because the hardware will already be installed, Coonrod said.

Explained simply, a controller installed in a home is the brains of the operations, Coonrod said, while a tablet and touchscreen in the home tells it what to do.

As far as the display in the Logan Homes Design Center, “we’re hands off once we put our technologies until a client picks a package,” Coonrod said. “It’s just another option that they offer, but the fact that they’re offering it, I think, says a lot.”

Although the price has come down to where some homebuyers with a budget below $750,000 are deciding they can afford the technology, “I feel like it is becoming attainable to that market,” Coonrod said. But “I don’t think we’re there yet.”

One of the top concerns Kelly had about the technology was something he discussed at length with Coonrod and Stephen Ardizzola, system technician at AcoustiCreations.

“It needs to be simple, and that was the biggest concern,” Kelly said.

Consumers don’t have to go to specialty firms to see the technology in action. Some of the signs of smart-home technology’s increased presence in the marketplace include displays on the ends of aisles at Home Depot and Lowe’s Home Improvement, Coonrod said.

Meanwhile, Apple has created HomeKit, “a framework in iOS 8 for communicating with and controlling connected accessories in a user’s home. Apps can enable users to discover HomeKit accessories in their home and configure them, or you can create actions to control those devices. Users can group actions together and trigger them using Siri,” according to the Apple Developer website.