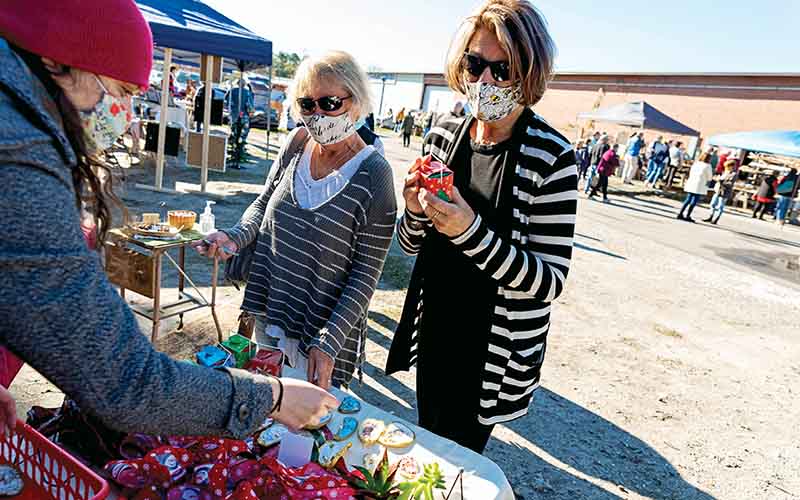 Granted, the indoor section of The Transplanted Garden makes for tight quarters, but the expansive, plant-filled grounds are a social-distancing dream. That’s likely a big reason that the Wilmington business at 502 S. 16th St. has had sales “pretty much where they should be” in recent months, according to co-owner Tom Ericson.

A few blocks over, the Historic Wilmington Foundation (HWF) reported brisk sales at its outdoor Holiday Gift Market, held annually at the organization’s Legacy Architectural Salvage store. The store’s site, at 831-B Dawson St., behind Stevens Ace Hardware, provided a large, open-air area for vendors. The LAS warehouse also was open for those looking for everything from antique doors to doorknobs.

“This was our most successful market to date,” LAS manager Deb Helms said of the Dec. 5 event.

“We were thrilled to have the space outdoors to offer a socially distanced shopping experience showcasing local makers, artists and vendors,” said Beth Rutledge, executive director of HWF. And many of the attendees were discovering the unique shop for the first time, she said.

Ericson, who opened The Transplanted Garden 20 years ago with Allen Sabin, said sales were strong all summer and fall.

And in what is likely a common refrain for retailers everywhere, Ericson added, “it is just a very different holiday all the way around.”

At Wrightsville Beach, the town’s farmers market also has proved popular at a time when outdoor shopping venues have some added appeal. Although inclement weather kept some vendors away at times, the generally moderate climate in the Lower Cape Fear means the market can extend its season – it will be open from 8 a.m.-1 p.m. on Dec. 21.

Ericson said that December is not one of The Transplanted Garden’s busiest months (though “it is certainly busier than January”), but he has discovered a holiday niche for an area rich with retirees.

“We sell gifts, candles and a few Christmas set-abouts,” Ericson said. “I have given up on Christmas ornaments after several slow years of sales in that category, but trees and shrubs are still strong sellers” this time of year.

“Retirees just do not need ‘stuff’ at that age,” he said. “So they give one another gifts for the yard. Garden statuary and fountains and pottery are generally good sellers at this time of year, as well.”

Businesses that already had an outdoor presence have felt less of an impact from COVID-19, but many indoor-only retailers have been quick to adapt to keep things humming in enclosed stores. Nearly 10 months into the pandemic, store managers have continued to tweak the shopping environment as necessary, not only to make it safe, but to try to give shoppers a normal-as-possible experience, according to Matthew Shay.

The CEO of the National Retail Federation (NRF) said stores have had to pay closer-than-ever attention to shoppers’ needs and expectations.

The key for retailers has been to “meet the consumer where, when and how they shop at the prices they want to pay,” Shay said, including accommodating online purchases.

That effort appears to have paid off. Despite the pandemic, 186.4 million consumers shopped in-store and online over the 2020 Thanksgiving holiday, according to a survey by the NRF. That was down from 189.6 million last year, but well over the 165.8 million people who made purchases in the same period in 2018.

Back at The Transplanted Garden, Ericson and his crew have kept the whimsical but admittedly cramped indoors section closed, so it was important to be able to get plenty of those items outside for customers to see – and, hopefully, purchase.

Although a green gardener isn’t likely to get rich on Black Friday, Ericson believes gardening has played a unique and valuable role during the pandemic, serving as a sort of therapy for folks suddenly at home more than ever.

It’s not just local home-related businesses that are doing well. Third-quarter same-store sales at Lowe’s were up 30% from last year, including a doubling of online sales. Home Depot saw a 24% jump in sales from a year ago.

And Lowe’s is looking to add customers who are looking for more than drywall and power tools. The Mooresville-based company is adding new items such as scooters, trampolines and exercise bikes and expanding its offering of kitchen items, according to its Q3 earnings call.

People not only are working on outdoors landscapes and home-improvement projects, they also are focusing on what’s growing indoors, The Transplanted Garden’s Ericson said, noting that sales of houseplants – already a hot category – have been three times more than in a typical year.

Michelle Conely, who owns Going Local at Mayfaire, has been pleasantly surprised with the sales at this year’s Holiday Market, which features works from over 60 local artisans and runs through Dec. 27.

“The traffic might be lighter, but those who do shop in-store are finding all locally made and affordable gifts that suit the needs of everyone on their list, and therefore are purchasing multiple items,” Conely said. “Considering the year we’ve all had, to us this signals a brighter future."