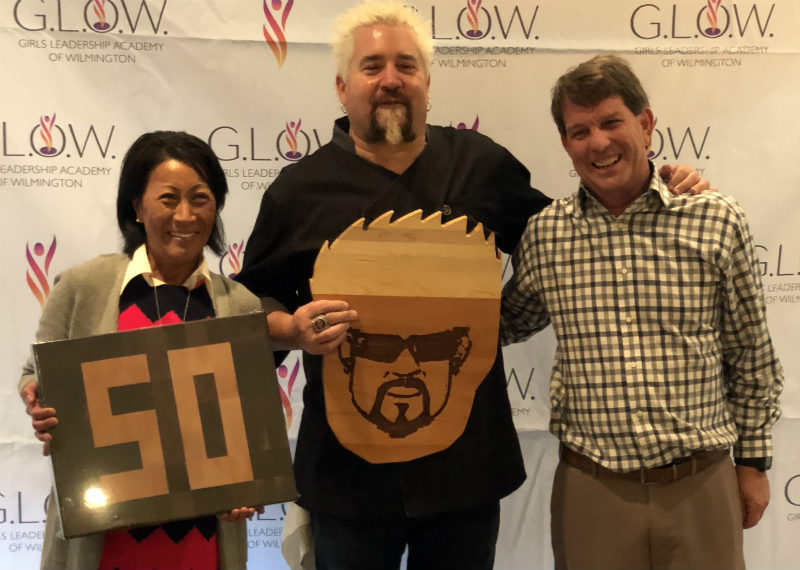 Lori Nash of Coastal Carolina Cutting Boards (left) holds a cutting board commemorating Guy Fieri's 50th birthday as Fieri (middle) holds the other cutting board presented by CCCB at a GLOW fundraiser. Also pictured is CCCB owner Tom Dean. (CCCB photo)
A product made by a Wilmington resident's company will be featured Thursday on Good Morning America on ABC.

Tom Dean, owner of Coastal Carolina Cutting Boards by The Dean Company of North Carolina, said the product, which he's not allowed to reveal until after the show airs, will be part of the 7 to 9 a.m. program's segment Deals & Steals with Tory Johnson.

Of the cutting boards, Dean said, "All of them are made of different woods. They're very unique and individual."

The Dean Company and Coastal Carolina Cutting Boards is a rebirth of Dean Hardwoods, which closed its doors in Wilmington in 2012. The cutting board business came about when Dean started making cutting boards to give to friends as Christmas gifts.

"Things are going great. This is a thinking-outside-the-box thing that has turned into something we never could have imagined," Dean said.

Dean's products have already found fame. The company's cutting boards have made it into the hands of celebrity chefs Emeril Lagasse, Giada De Laurentiis and most recently, Guy Fieri, through the firm's contributions to fundraisers for Girls Leadership Academy of Wilmington (GLOW). The chefs were presented with handmade, custom-designed cutting boards when they visited Wilmington for GLOW fundraisers. 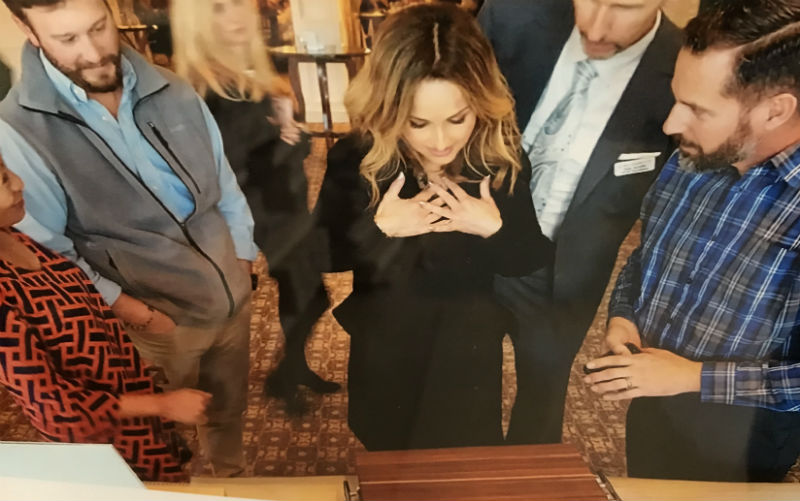 De Laurentiis (shown receiving her board at right) liked her one-of-a-kind walnut cutting board so much, she carries the company's cutting boards at Pronto by Giada, her restaurant at Ceasars Palace in Las Vegas, said Lori Nash of Coastal Carolina Cutting Boards.

Of the GLOW fundraisers and the cutting boards, Nash said, "Once we know what chef is coming, we start brain-storming right away. We put a lot of effort and a lot of thought into the boards that we give these chefs."

Crews working for GLOW, a female-only public charter school for sixth- through 12th-graders, have begun construction on the academy's new 57,200-square-foot campus. The project was made possible by $8.8 million in financing from SunTrust Bank, including $3.5 million of New Markets Tax Credit (NMTC) equity, $1.1 million of bridge debt and $4.2 million of construction debt, allowing the school to more than triple in size, according to a news release.

A GLOW foundation board member, Phil Clark, helped connect Dean to the school's fundraisers. Cutting boards have been sold at GLOW fundraising events, with 25 percent of sales going to the school, and have been given to major donors.