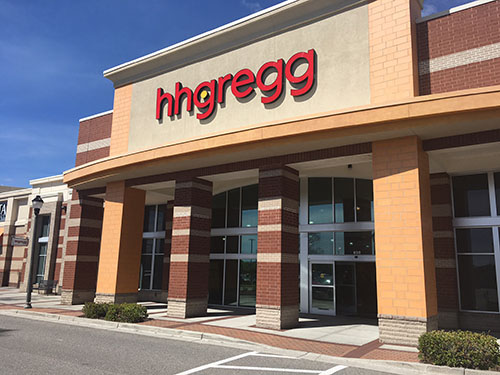 The Hhgregg store in Mayfaire Town Center is one of hundreds the chain is closing nationwide. (Photo by Vicky Janowski)
Mayfaire Town Center’s Hhgregg location will close as part of the electronics chain’s decision to close all 220 of its stores across the country.

The Indianapolis-based retailer, which filed for Chapter 11 bankruptcy in early March, was unable to find a buyer by its deadline Friday and started a liquidation process over the weekend.

Hhgregg informed Mayfaire Town Center officials on Saturday of the situation, said Paige Somervell, spokeswoman for the shopping center. She added that the center did not have any more details about when the Wilmington store would close its doors for good.

Going out of business placards and signs announcing that items were 10-30 percent off hung around the store on Monday.

The chain expects to close all of its stores by the end of May, affecting as many as 5,000 workers nationwide.

The Mayfaire location opened in 2009 and takes up 28,000 square feet in the center, Somervell  said.

Retailers nationwide are having a rough go with their brick-and-mortar stores, with some of those financial troubles affecting the Wilmington market and some glancing past the Port City for now.

Among the recent retail shutterings are the Kmart on South College Road and The Limited in Independence Mall – both casualties of national closure decisions for the brands. Other brands from Payless to Sears in recent months have announced store closings in the hundreds across the country though not in southeastern North Carolina.

Hhgregg, which sells consumer electronics, appliances and furniture, was not immune to the same pressures other brands invested heavily in physical stores are feeling, including competition from online shopping.

Since filing bankruptcy on March 6 “we have continued to fight for the future of our company,” Bob Riesbeck, president and CEO for Hhgregg, said in a statement about the announcement about the chain’s move to liquidate its assets.

“While we had discussions with more than 50 private equity firms, strategic buyers, and other investors, unfortunately, we were unsuccessful in our plan to secure a viable buyer of the business on a going-concern basis within the expedited timeline set by our creditors,” Riesbeck said.

The Hhgregg space, which sits in between Ulta and World Market at Mayfaire, will be marketed for a new user, Somervell said.

“Our leasing team is evaluating a number of potential replacement tenants,” she said.