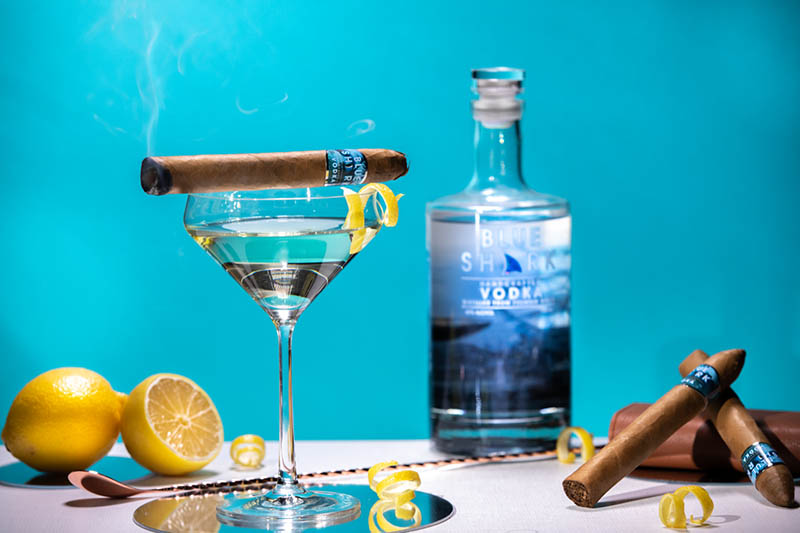 Blue Shark Vodka’s owners are dipping their toes into the premium cigar business, according to company founder Mark Bloomquist. The idea, according to Bloomquist, came from his 10-year-old grandson Kiptyn.

“It was the Fourth of July 2020, and we were all on the beach,” Bloomquist said. “Kiptyn was sitting on the beach being very pensive, which was unusual for him. That night as we grilled in our backyard, he said ‘I’ve got an idea. I think Blue Shark Vodka needs a premium cigar.’”

The following day, Bloomquist did a bit of research on premium cigar makers; the name J.C. Newman Cigar Co. came up. Bloomquist wrote a letter to Bobby Newman, who runs the family-owned company with his brother Eric. He got a phone call in return, inviting him to come visit the company at its Tampa, Florida, headquarters.

Bloomquist and Kiptyn toured the facility with Bobby Newman at Christmas time last year and discussed their vision for a cigar that would complement the Wilmington-made vodka. They came away from the tour with an alliance.

“Bobby said, ‘This will be a true collaboration between two families,’” Bloomquist recalled, adding that the specifics of the arrangement were hammered out only later.

Connor Barth, an investor and part-owner in Blue Shark Vodka and national spokesman for the company, offered to run the cigar business, leaving the Bloomquists to focus on their vodka. He worked closely with Elif Siebenpfeiffer, a German artist who designed the Blue Shark Vodka logo.

“Elif has been amazing,” Barth said. “She has done a lot of the artwork on the bottles. I smoke cigars occasionally, and I love the bands around the cigar. So I asked her, ‘How can we take the beautiful underwater design on some of our bottles and translate this into a design for the band?’ It came out fantastic.”

Barth, a Wilmington native and previously an NFL kicker, also helped develop the shape of the new limited-edition cigars, which are hand-rolled for them in Nicaragua, thanks to the alliance with J.C. Newman.

“It’s torpedo style, suggesting the shape of the shark’s nose,” he said. “It goes back to our whole vision of the blue shark.”

Barth was also involved in determining what kind of smoking experience the Blue Vodka cigars would provide.

“We think highly of our vodka; we wanted to make sure we produced high-quality cigar but one that was easy to smoke – light and easy and cool to pair with our vodka,” he said. “I researched different shades of wrapper [the visible outer leaf of a cigar] and decided on the Connecticut wrapper: It’s a light-looking, light-smoking cigar."

Blue Shark has received a tobacco license that allows the company to sell the cigars in North Carolina. They will be sold directly to consumers through the Blue Shark website.

The 2021 cigar edition is indeed limited, with only 1,000 made thus far. For the time being, they will be sold in batches of three in specially made leather pouches, according to Barth. Made-to-order boxes from China should arrive in the spring, allowing Blue Shark to sell its cigars in quantities of five and 20.

“We’ll see how things go with our first thousand, but we definitely want to do a second iteration,” Barth said.

Bloomquist said, regardless of the company’s success with its signature cigar, its experience with direct-to-consumer sales will serve it well as it develops other Blue Shark products.

Meanwhile, the Bloomquist family is expanding the production and distribution of its signature vodka, which came away from this year’s SIP Awards with the Consumers Choice Award as well as high honors for package and bottle design. It has established a distribution hub in Las Vegas and sells in Nevada as well as in North Carolina. The next step, Bloomquist said, is to begin distributing Blue Shark Vodka in California from a new center south of Los Angeles.

The family’s commitment to the environment will continue, according to Bloomquist. True to its company name, a portion of vodka sales benefits the Atlantic Shark Institute, which tags and collects information on these large predators that play a key role in the health of oceans. Blue Shark Vodka also donates to the Wyland Foundation’s work with oceans and waterways.

Earlier this year Blue Shark Vodka produced its spirits in a special “Be Colorful” bottle. Sales of that limited-edition series benefited GLSEN, the Gay, Lesbian and Straight Education Network, which works to end bullying and harassment based on sexual orientation and gender identity in K-12 schools.