Prior to accepting the Grand Cru position, Dolce worked for the Cape Fear Country Club and Fat Tony’s in downtown Wilmington, as well as several family-run restaurants in his native upstate New York.

Dolce (pictured below) said he was inspired by the challenge of working with a new customer base at a restaurant specializing in high-end food and wine.

“People come to Grand Cru and stay for a while,” Dolce said. “It’s not the churn and burn you get with the tourist crowd downtown.” 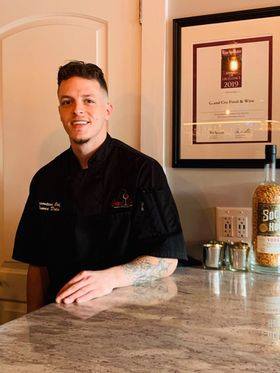 Dolce was also eager to accept the challenge of working in a new style of kitchen – one that has no open flame and utilizes induction cooktops, as well as convection and Alto-Shaam ovens.

“In such a small kitchen it’s all about organization and efficiency,” Dolce said. “And that challenges me to get creative.”

Dolce spent his first week under the direction of former executive chef Joseph Heskin, who helped him navigate the equipment and trained him on some of the restaurant’s most popular dishes, which Dolce plans to keep on the menu.

He has however been working on putting his own spin on things and recently rolled out a new menu featuring local seafood that is delivered fresh daily from Intracoastal Seafood, and seasonal ingredients.

One of his favorite fall foods is sweet potatoes, which are featured in three new dishes: seared scallops with a sweet potato puree, broccolini and a slow cooked bourbon bacon jam; a sweet potato and spinach risotto with parmesan cheese; and for dessert a sweet potato crème brulee.

“It’s important to cross utilize product in order to avoid waste and increase efficiency without having too much of the same item on the menu,” Dolce said.

Grand Cru is now serving lunch and Dolce is focused on growing that aspect of the business. He’s built a menu featuring his take on a Cubano panini with pork belly, prosciutto, smoked provolone and house pickles and peppers with a Dijon horseradish cream sauce and a truffled egg salad sandwich on toasted sourdough with romaine and tomato.

Dolce said his menus will change seasonally and it’s his hope to eventually utilize 100 percent local ingredients. Once the new menus are running smoothly, he plans to incorporate daily specials as well.

Despite restrictions on dine-in capacity, Dolce reports record sales of late. The restaurant has been able to resume its Tuesday wine tastings with tableside service from 5–7 p.m.

Reservations are accepted and live music on the patio takes place on Thursdays from 7 p.m. – 9 p.m. and on Friday and Saturday from 8 p.m. – 11 p.m.