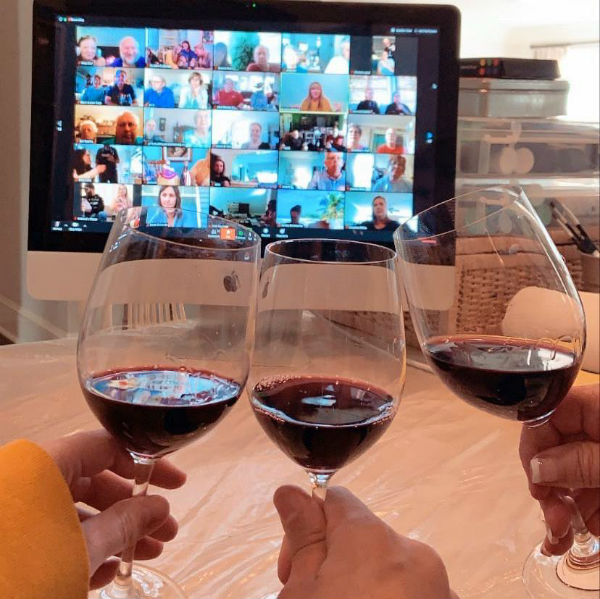 Soif de Vin on South College Road has been hosting virtual wine tastings. (Photo courtesy of Soif de Vin)
Wine tastings and dinners are a big part of Soif de Vin’s business model, but because of COVID-19 restrictions, the wine shop had to come up with alternative ways to keep customers engaged.

While upcoming plans in real life include installing a full kitchen at the South College Road establishment, the shop has launched a series of virtual wine tastings and cooking classes to stay connected with the community.

“We’ve worked really had to keep things afloat and started the virtual tastings pretty early on,” said Shawn Underwood, husband of Soif de Vin owner Amy Siler. “It doesn’t bring in a ton of money but it’s definitely helped with the cash flow.”

The wine tastings are listed as Facebook events, and the price per tasting includes a bottle of each wine in the lineup. Free delivery is offered for those within a 5-mile radius of the store.

Soif de Vin was closed to the public for several weeks, but has been operating with curbside pickup and delivery, and Siler reports that business has been steady.

“Delivery has become increasingly popular,” Siler said. “It’s a safe option for everyone and something that we can easily fulfill even outside our normal business hours.”

Participants are given recipes and a list of ingredients in advance so that they can cook along with the chef. A bottle of wine is also included in the price of the class.

“The great thing about Zoom as a platform for the classes is that it’s very interactive,” Underwood said. “Participants can talk and ask questions throughout the class.”

Siler said the one of the goals of the online classes is to help create some revenue for chefs that may have lost income throughout the pandemic.

“We really aren’t making money on these classes,” Siler said. “The majority of if goes to the chefs to help support them while business is slow.”

In other news, Siler is set to begin work on the installation of a full kitchen, which will shift her business from that of a retail outlet to more of a dining destination. While she will still stock some retail wines and be able to order wines for customers, the kitchen will allow for everyday meal service and larger special events.

“We’re going to have a great glass list and some awesome pairings,” Siler said.

Pending approval from the health department, construction on the kitchen is expected to begin shortly, but an actual date of launch for the Soif de Vin reboot is still to be determined.

“We’re excited for this next step and want to let our customers know that we appreciate the support that we’ve continued to receive during this time,” Siler said.

Correction: This version has been changed to reflect that some quotes were incorrectly attributed.