Who Won The Food Truck Throw Down Hosted By Tyler Florence? 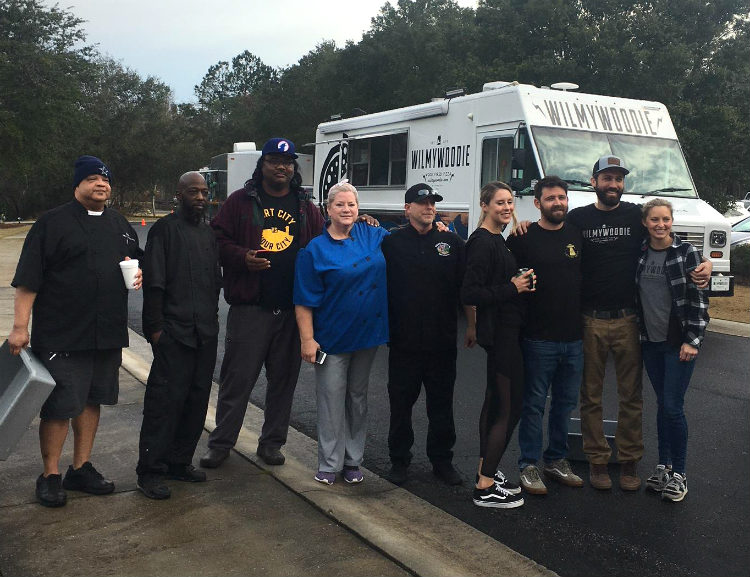 Guests were greeted by students of the Girls Leadership Academy of Wilmington (GLOW), who spent the day with Florence on Wednesday. Culinary instructors Beth Hollis and Lynn Michaels said Florence arrived in town early to spend the entire day with the students, helping to judge a cooking competition and preparing mac and cheese during a live demo.

“He seemed really happy to be there,” Lynn Michaels said. “And shared a lot of inspiring words with the girls.”

The food truck challenge participants were introduced to the guests and each given two surprise proteins, local oysters and pork tenderloin, around 8:30 a.m. They then had 45 minutes to prepare a dish that would be judged, by students, on the use of both ingredients, presentation and flavor.

“You’d better bring your A game,” said Tyler Florence, upon announcing that the students would determine the winner.

While the competition went on outside, Florence took questions from guests and expressed his gratitude to his former boss at the Food Network, Judy Girard. Girard, founder of GLOW, hired Florence 24 years ago, joking that she initially hired him because he was “cute.”

“He’s still cute,” said Girard, “But I see now what an incredible chef and teacher he is.”

While the food truck chefs scrambled to put together their dishes, students from GLOW provided real-time updates to the guests inside via a live feed, similar to how Florence checks in with competitors on The Great Food Truck Race.

Once the votes were tallied, it was chef Keith Rhodes of Catch who came out on top. Rhodes served a barbecue pork and smoked cheddar spring roll with North Carolina chow chow, alongside a cornmeal fried oyster taco with bacon ranch slaw and black-eyed pea salsa.

As for Florence’s menus, he served homemade granola with yogurt and local strawberries along with his take on a Croque Madame sandwich for breakfast, and for lunch, a butter lettuce salad with his signature fried chicken with sweet potato chorizo hash.

Florence told guests that fried chicken is one of his all-time favorite entrees, and that within minutes of landing in Wilmington, he was enjoying a plate of it at Jackson’s Big Oak Barbecue. When asked if he might consider opening a restaurant here in the Port City, Florence said he’d like nothing more than to help put a city like Wilmington with a blossoming culinary scene on the map.