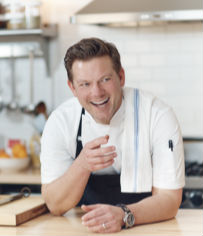 Florence, a native of Greenville, South Carolina, graduated from the College of Culinary Arts at Johnson & Whales University in Charleston, South Carolina, in 1991. Upon graduation, Florence spent several years working under many of New York City’s premier chefs before landing at the Food Network 15 years ago. Since that time he has hosted numerous shows for the network in addition to opening a store, creating a line of cookware and cutlery, publishing several best-selling cookbooks and opening two restaurants in the San Francisco area.

Plans call for Florence to challenge each food truck with mystery ingredients at the beginning of the fundraising breakfast. Breakfast attendees will watch the food truck chefs compete via remote cameras. Florence will ultimately select one truck as the Food Truck Throw Down winner.

Each participating food truck chef has also offered a private catered party for 25 guests, to be auctioned off during the fundraising breakfast.

Florence is the fifth Food Network star to visit Wilmington in support of GLOW Academy.  Emeril Lagasse hosted events in 2016, Giada De Laurentiis in 2017, Guy Fieri in 2018 and Robert Irvine in 2019.  The celebrity chef events reflect the career of GLOW Academy Founder Judy Girard, who was president of the Food Network from 1994 to 2004.

Tickets can be purchased online.