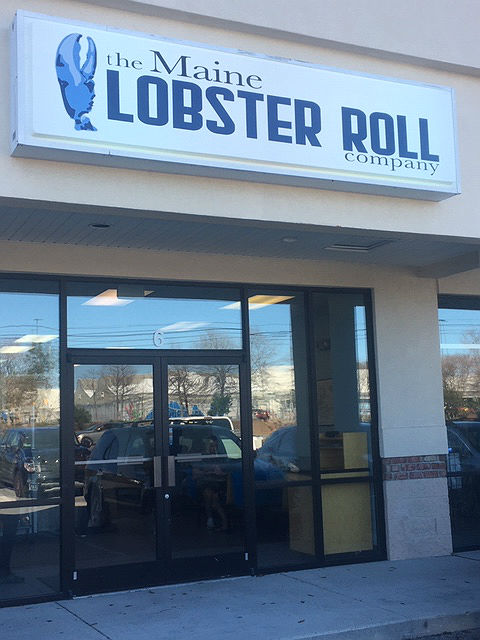 Ever since the restaurant was announced last summer, owners Bill and Monica Irwin have been fielding questions daily about when they would be open for business.

The Irwins moved to Wilmington seven years ago from Bangor, Maine. A few years ago, Bill Irwin said he noticed that there were several franchises popping up across the country specializing in lobster rolls. He went to observe one of them in Washington, D.C., and said to himself, “I can do that.”

But Irwin wasn’t interested in following a corporate franchise model. He wanted to be in business for himself and do things his own way. And for him, that means keeping things simple.

The Maine Lobster Roll Co. serves four types of lobster rolls, each in three sizes -- half, whole and hearty -- served on a buttered, toasted New England-style hot dog roll with a side of cole slaw and a lemon wedge. They also serve New England clam chowder by the cup or bowl. The only other items on the menu are a grilled cheese, a BLT, a PB&J and a Fluffernutter sandwich, along with chips and drinks.

Traditionalists will likely choose the Mainah, lobster tossed with a light coating of mayonnaise and served chilled, or the Stonington, lobster tossed with warm butter. The two other styles are the Rockland, with mayo, celery, and chives, served on a bed of lettuce, and the Portland, with lobster, mayo, bacon, lettuce and tomato.

Bill Irwin said he took his Opening Soon sign down on Dec. 20, and had a line out the door within an hour.

“I didn’t announce our opening to anyone, it just started spreading by word of mouth that quickly,” he said. “We’ve been very humbled by the great response and positive reviews.”

Bill Irwin said he has been so busy that he’s already experiencing growing pains, less than one month in.

Having upfit the space himself, he was conservative on kitchen equipment to start. But he’s already in need of more refrigeration space to accommodate the steady service. He also didn’t expect to have to hire any additional staff so soon.

“I thought my wife and I could do this ourselves,” he said. “I had no idea how busy we’d be.”

Bill Irwin said his vision is to be able to speak with as many customers as possible when they come through the door.

“Lobster rolls are the kind of thing that evoke a lot of memories for folks and there are so many connections to be made,” he said.

For that reason, Bill Irwin said he never claims to have the best lobster roll.

“Oftentimes you’re competing with people’s memories of the perfect lobster roll they had years ago while on vacation with their family,” he said. “And it can be really hard to compete with that. But we hope to offer them a great meal and a chance to enjoy and share those memories.”

At the same time, Bill Irwin said he has been surprised by how many of his guests are trying a lobster roll for the first time, noting that if you’re not from New England or have not traveled there, there’s a good chance you might not have had the chance to try one.

“We’ve had a lot of first-timers,” he said. “And some of them are already repeat customers.”

Bill Irwin said he is trying to keep things as authentically “Maine” as possible, but is open to customer feedback and suggestions.

The Maine Lobster Roll Co. is located in the Austin Commons shopping center at 5202 Carolina Beach Road and is open from 11 a.m. to 7 p.m., seven days a week.