One Chef, 3 Restaurants At Roudabush 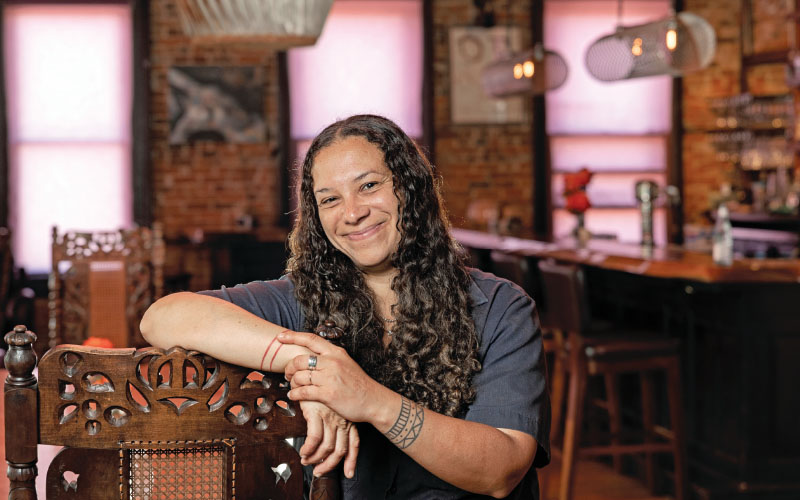 Earlier this year, longtime Wilmington chef Erin Wiley took over as executive chef of the Husk, YoSake and Dram + Morsel. (Photo by Michael Cline Spencer)
Farm-to-table expert and San Francisco transplant Erin Wiley is the executive chef at not one but three of downtown Wilmington’s most frequented eateries.

After two stints with Roudabush Restaurants over the past decade, Wiley returned to the team in April to oversee the kitchens on all three floors of 33 S. Front St. – the Husk, YoSake and Dram + Morsel.

“It’s a lot of up and down,” Wiley said. And she’s not just referring to the stairs she travels many times throughout that day.

“I’m not perfect, but I do feel proud of the work I’ve done,” Wiley said. “Having just one restaurant is extremely difficult and challenging … I use the [elevator] more than I should.”

Considering her demanding workload, no one will judge Wiley for skipping a few unnecessary steps. Roudabush owners – especially the one who persistently drafted her back to their team – praise Wiley’s streamlined management style and no-nonsense leadership approach. With almost 20 years of experience, this humble chef doesn’t mess around in the kitchen.


Wiley, 38, made her first big move in her early 20s – from the small town of Oak Ridge, Tennessee, to San Francisco, where she journeyed for culinary arts school.

For many years, she called the Bay Area home, working at notable restaurants such as Firefly Restaurant, 1300 on Fillmore and Foreign Cinema. Connections to family brought her to the East Coast in the mid-2000s. YoSake was the first local restaurant she called home, before moving on to help launch the successful Rx Restaurant, as well as the former Pembroke’s.

After almost a decade in Wilmington at various eateries, Wiley found herself back on the second floor of the Roudabush building when she temporarily rolled sushi for YoSake – something she’d never done with them before. With construction for Dram + Morsel upstairs, Wiley anticipated the opportunity to lead its kitchen. With a boutique-style menu in mind, it spoke to Wiley’s love of farm-to-table cuisine.

But when construction delays continued, an opportunity at Porches Cafe in Castle Hayne arose. As it turns out, this was the move that was best for her growing family.

“Porches was good to me,” she said. “I had my baby there. I wasn’t working really long hours, and it was really nice to have those afternoons in the first year of my daughter’s life.”


Roudabush co-owner Bekah Smith heard about Wiley when she first joined the YoSake team more than a decade ago.

“I just knew her as somebody our head chef really relied on,” she said. “At the time I think she was looking for something a little different, though. Back then it was more of a boys’ club.”

At Roudabush, that’s no longer the case. With Wiley as the three-restaurant executive chef, Smith as an owner and Kyra Tebo as manager, the entire leadership team at the corner of Dock and Third streets is female.

“It really comes through in not just her management style, but her cooking,” Smith said. “Everything she does – everything she makes – is just so exceptional … Something inside of me kept saying, ‘you need to reach out to Erin.’”

While Smith became more invested in Roudabush and Wiley continued progress at Porches, they caught up regularly over beers.

“I felt I needed her and wanted to work with her and in a capacity where she and I were both kind of in charge,” Smith said.

At the same time, Wiley began to feel like, maybe, she had done everything she could for Porches. Although she helped it grow into a thriving cafe, there’s only so much to explore with soups, sandwiches and salads. She craved a return a more multifaceted dining experience.

When Roudabush finally made an offer that would allow Wiley’s husband (also a chef) to stay home with their 2-year-old daughter, Theodora (Theo for short), she made her next big move.


Wiley works 50-plus hours, closes two nights and organizes and preps everything for all three eateries every week. Roudabush is still developing the best support staff.

Because the three restaurants can share product, ordering and scheduling are more efficient, reducing costs.

“Having someone who knows what’s going on in the building at all times, there are lot less surprises,” Wiley said.

Soon, Dram + Morsel will return to its original concept of small, creative plates. Look out for Wiley’s new favorite – lamb meatballs in a romesco sauce, with crispy chickpeas and fried mint.

The Roudabush team, believe it or not, is preparing to add a fourth eatery to their downtown hub – a deli to be transformed out of a current office suite, which shares a courtyard with the Husk.

“I’m really, really proud of her,” Smith said. “No one has been able to take on all three successfully. It’s all about building a team and putting the right people in place.”