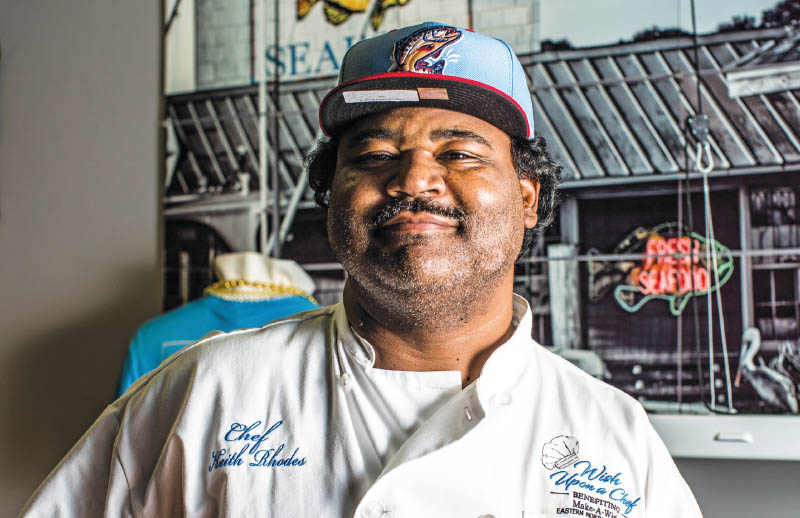 Chef Keith Rhodes is bringing the popular food hall concept to Wilmington, on Princess Street near the former Coca-Cola bottling building. (Photo by Megan Deitz)
If the term “food hall” spurns imagery of an on-base mess or a grouping of Super Bowl ad-buying, quick-serve counters amidst a gaggle of retail locales, think again.

Modern food halls are a newer wave of establishments that have been popping up throughout the United States, often in downtown cores. Some estimates predict that there could be more than 300 food halls nationwide by the end of 2020.

“We’ve been to New Orleans, Baltimore, Miami, everywhere just trying to just bring the best of what we can to our area and community,” Rhodes said.

Most food hall occupant businesses are locally owned, feature local chefs and use locally sourced and often organic ingredients, giving each food hall a flavor all its own.

Rhodes shares a similar vision for his yet-unnamed food hall in Wilmington, currently under development on Princess Street near the former Coca-Cola bottling building. He hopes to see the food hall open its doors early this summer.

“It will all be local,” Rhodes said. “No big chains. We had someone that was interested franchise-wise. But that was still a local chain. We have a lot of local folks who have good concepts that we are definitely entertaining.”

Rhodes, the owner of longtime Wilmington staple Catch and its popular spinoff, Catch the Food Truck, will occupy one of the food hall’s six stalls with a to-be-determined culinary concept. Rhodes says there is no shortage of interest in the hall’s other stalls.

“We have several folks on standby waiting for a commitment on this endeavor,” Rhodes said. “It’s an everyday place that we’re looking at. One of the stalls will be dedicated to an incubator kitchen. I am going to occupy one of the stalls, and the rest will be out for some of the other vendors that have approached me about going in.

“We are looking to have a transitional bar that will serve juices and coffee during the day and then will have cocktails at night. We have someone who is really interested in putting an oyster bar in, so that is a strong possibility as well.”

THE DEATH OF FINE DINING?

Food halls fill a space somewhere between a sit-down restaurant and a food truck, offering guests multiple food options in a shared space. In a sense, they are an answer to today’s transient, work-from-home, social- media-addicted, Short Attention Span Theater way of life.

“The trend is definitely directing people toward a different style of eating,” said Niall Hanley, whose Hibernian Hospitality Group opened Raleigh’s Morgan Street Food Hall & Market in 2018. “We have seen fine dining taking a bit of a slap on the knuckles from the wooden spoon over the last couple of years.

“The younger generations that are coming up, there is a style of eating and a style of impatience involved with eating that, they want a lot of choice, they want it to be presented in a closed venue and it needs to be great food and generally sourced local,” he added.

“There are many advantages to food halls,” Hanley said. “One is, you’re not an island. In a food hall, you part of a destination with a group of other people and that supports your business. Once you’re in the food hall, you should try to excel and be the best one there. A food hall gets you the customers because location is everything in the restaurant business.

“The costs of opening a restaurant in a downtown area is enormous. With food halls, there’s a shared cost. Rental charges can be higher, but, generally, upfront costs with opening are a lot lower. You’ve got a smaller space, generally, the landlord will help you with some things, and then you have a smaller expense in regards to getting open.”

Like Rhodes, providing local chefs with an outlet to present their creations is one aspect that drew Adair Mueller to consider a food hall for her hometown of Durham.

“I want it to be an incubator for local talent,” Mueller said. “We have a lot in this state and the Southeast, and it’s really fun to be able to highlight that.”

Mueller’s Durham Food Hall will open its doors in April or May, joining Hanley’s Morgan Street Food Hall & Market that debuted in Raleigh in August. Charlotte boasts the oldest of North Carolina’s modern food halls, with its 7th Street Public Market having opened in 2011.

But as much as food halls might help cultivate their area’s culinary talent, the open-space, open-seating halls also serve as gathering spots. Mueller visited more than 70 food halls in the U.S. and abroad before fully committing to her vision for Durham Food Hall.

“There is a real focus on the seating and community aspect of the space,” she said. “It’s important for all of the guests that come into the space to be able to feel comfortable and have a full experience. So the design needs to be right, down to where they’re going to sit down and how many different seating options they might have depending on what they are looking for that day or what size of group they have. Design is hugely important.”

Rhodes shares the same view and expects Wilmington’s food hall to draw residents and visitors alike to the area.

“Ultimately, we would love for this food hall to be a destination place for people,” he said. “Not only people who live here in Wilmington but people who come and visit our community as well, with some really solid, varied food offerings and a really cool price point.”