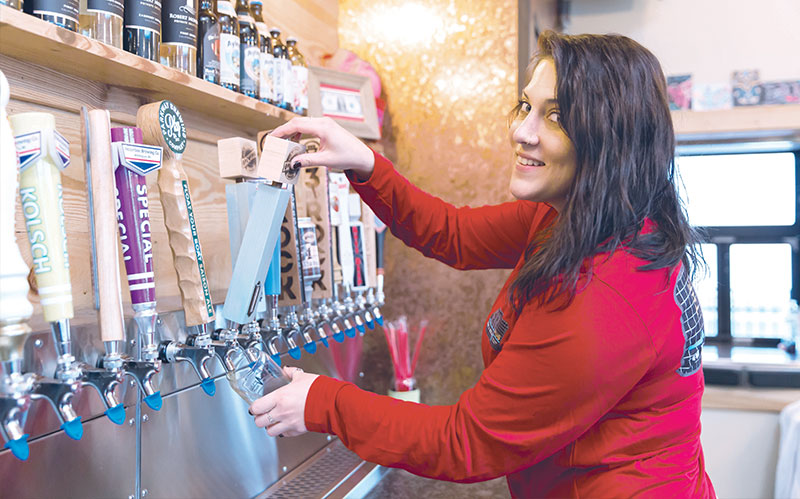 Tricia Sandoval, manager of The ER Pub at the Phoenix Mart on South 17 Street, pours a pint from one of the con-venience store’s 24 craft beers on tap. (Photo by Chris Brehmer)
Drivers on 17th Street looking to fill their gas tanks or pick up a soda and a bite to eat might be surprised by the unusual combination of offerings they find at Phoenix Mart, 2238 S. 17th St. across from the hospital.

Springer Eubank opened the Phoenix Mart about a year ago. Company owner Cecil Worsley decided that workers in the area would welcome not only a convenient lunch and fuel stop but a small pub where they could wind down after work.

“We called it The ER Pub because workers from the hospital emergency room come in at the end of their shifts,” Worsley said. “It’s definitely a weekday store – a work location,” His hunch proved correct. He and pub manager Tricia Sandoval said 7 a.m. and after dinner are busy times in the pub, with crowds ranging from a handful of people to a group of 20 or 30.

“Is this something I thought would do huge volume? No,” Worsley said. “But it’s catering to a specific crowd.”

The Phoenix Mart in Wilmington is one of many convenience stores across the country employing diverse business models to fill niches and increase profit margins as changes in fuel prices, buying trends and customer expectations have changed the way business is done.

The ER Pub has 24 craft beers on tap and also sells a variety of local and regional beers and wines. The pub opens at 7 a.m. and closes at midnight Monday through Saturday, and is open Sunday from 1 to 7 p.m. “We’ve gotten some pretty positive feedback,” Worsley said.

The Jimmy John’s franchise location stays busy at lunchtime as well, while fuel and retail business remains steady, he noted.

Convenience items, foods and drinks no one considered finding in a gas station in years past are becoming more and more the norm in the business, according to Jeff Lenard, vice president of strategic industry initiatives for the National Association of Convenience Stores (NACS), mainly because “the definition of convenience continues to evolve.”

Lenard explained that chain stores ranging from Home Depot to Bed Bath & Beyond “all look like a convenience store at the register, selling drinks and snacks.”

The average convenience store’s core offerings are also changing, Lenard said. “While demand for motor fuels is strong with relatively low prices, electric vehicles will grow in sales, and new options like autonomous vehicles will affect demand and fueling,” he said.

In addition, fewer younger people are getting driver’s licenses, and the number of cigarette and soda purchases continues to decline.

“Increasingly, convenience stores are turning toward prepared food, even gourmet food, to address consumer demand,” Lenard said. “And craft beers and growlers are part of that trend.”

Worsley, whose company previously owned about 100 Scotchman stores before he changed the business model to include wholesale and transportation, agreed that not only are customers expecting more, but costs of doing business have increased as well.

“The biggest change is that the cost of entry is huge,” he said. “To build a facility takes a lot of money. The price margin on gas and cigarettes is small, so you have to up your game.”

In that type of competitive environment, “customers expect more,” Worsley added. “It’s not just a matter of put it in, and they show up. You have to find more offerings to sell.”

NACS reported that virtually any item inside the store can carry a healthier profit margin than a fill-up at the pump, which has an average markup of 20 cents per gallon.

“Circumstances can get even worse when fuel prices climb since the markup decreases while costs – particularly credit fees – increase,” according to the report.

For his part, Worsley, whose company owns 10 convenience stores in about a 100-mile radius, says he doesn’t have any plans to build any more new stores in the area.

“We will be focusing more on acquisitions,” he said. “It’s just so costly to build new ones, and the appetite for new construction just isn’t there.”

Meanwhile, customers’ appetites for more food, drink and impulse buys continues to grow, and the convenience store industry is looking ahead to keep up with those appetites in more creative ways.

According to the NACS report, convenience stores will continue to face competition from chain drug stores, dollar stores and general retail stores and will also have to contend with new competitors on the horizon such as click-and-collect grocery delivery, fueling-on-demand and even drone delivery options.