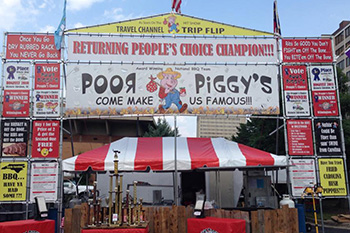 Bruce has worked with Coulbourn for the past few years, learning the tricks of the trade. Coulbourn has been a three-time winner of the People’s Choice Award at the Port City RibFest, taking home the award each year since the festival began. Coulbourn says he looks forward to reuniting with the Poor Piggy’s team for this annual event in Wilmington.

Poor Piggy’s began catering parties and entering barbecue competitions back in 2010. Coulbourn said that while Poor Piggy’s afforded him the opportunity to pursue his barbecue dreams, he needed to switch gears to a career that allowed more flexibility for his growing family. Prior to starting Poor Piggy’s he worked in real estate and has recently signed on with the Keith Beatty Team at Intracoastal Realty where he will pursue real estate full time.

Bruce says that little will change as far as the food truck, with the exception of the lowering of some of the prices. The truck makes regular stops at University of North Carolina Wilmington and PPD and is available for private bookings.