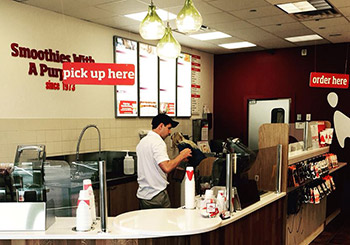 (Photo courtesy of Smoothie King Wilmington)
Lane Trogdon recently acquired the Wilmington Smoothie King location at 415 S. College Road as part of a franchise agreement to open a total of 55 stores by 2020.

This is the largest-ever franchise agreement for the company, according to a public relations representative from No Limit Agency of Chicago.

Trogdon, a Wilmington resident, opened the first Smoothie King in the Hampton Roads area of Virginia last month and plans to open seven additional Southeast locations by the end of the year.

Smoothie King was founded in 1973 by Steve Kuhnau. In 1989, Smoothie King became the first smoothie franchise in the U.S. and currently operates in 33 states, the Caymans, Singapore and South Korea.

The privately held, New Orleans-area-based franchise company has more than 700 units worldwide. For the 21st year in a row, Smoothie King was ranked No. 1 by Entrepreneur magazine in the juice bar category and No. 79 overall on the 2015 Franchise 500 list.

Area chefs compete in first round of state competition