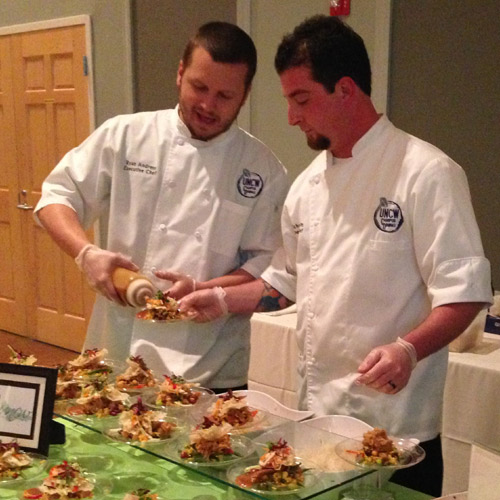 Ryan Andress and Jon-Michael Rehm (Photo by Liz Biro)
Restaurants and their chefs have been busy this year helping feed the hungry, most recently for the Food Bank of Central & Eastern North Carolina’s Wilmington Branch.

During the organization’s Iron Skillet cook-off April 6 at the University of North Carolina Wilmington’s Burney Center, five area chefs battled to see who could use humble ingredients -- bananas, cabbage, carrots, chicken thighs and brown rice -- in the most interesting and delicious ways.

The $15 entry fee gave the roughly 150 attendees 15 votes to distribute among chefs. More votes could be purchased as the night progressed.

“What that means is this community helped to generate funds that will provide 22,645 meals for our neighbors in need,” Rose said.

Pottery artists made bowls and cooks supplied all sorts of soups at the event, staged every other year at First Baptist Church Activity Center near Independence Mall. More than $45,000 was raised, said Anne Steketee, Empty Bowls organizer and co-owner of Port Land Grille.