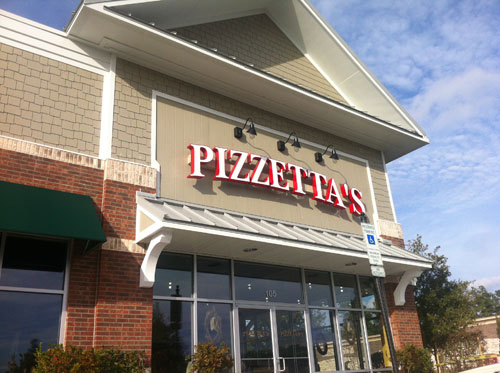 With the Dec. 8 opening of Pizzetta’s Pizzeria at Brunswick Forest, Leland might officially be called “Little Italy.”

Pizzetta’s is one of four Italian restaurants on about a mile-long section of U.S. 17 in the area of Waterford, Magnolia Greens and Brunswick Forest residential communities.

Pizzetta’s, 1144 E. Cutlar Crossing, is between CVS and Lowe’s Foods at the new 500,000 square-foot The Villages at Brunswick Forest retail and professional center.

The mainly pizza and pasta menu is the same as that served at Pizzetta’s first store, 4107-F Oleander Drive inside Anderson Square Plaza, but the new Pizzetta’s has a full bar with televisions, patio seating and a more open-air atmosphere.

This week, top crooners like Frank Sinatra eased out of Pizzetta’s sound system as owners Sal Lucido and Vito Lucchese beamed at the bar. Lucchese recommended $5.50 Guinness pints while Lucido advised that specialty martinis and other creative cocktails are coming soon.

Pizza by the slice, New York and Sicilian style, is sold as well as calzones, stomboli, heros, soups, salads, homemade desserts and hot entrees such as chicken marsala and eggplant parmigiana. Prices range from $2.50 slices to entrees mostly in the $7-$14 range.

The new Pizzetta’s opens at 11 a.m. daily and closes when the bar crowd moves out in the evenings, Lucchese said.

Also opened within the past 18 months in the area are Tony’s New York Pizza and Trattoria, 1107 New Pointe Blvd., and Falcone’s in Waterford Center, near Harris Teeter, on Old Regent Way.