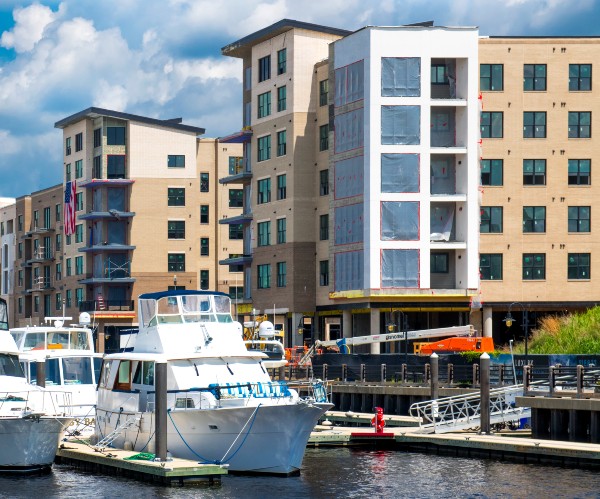 The loan was made to Pier 33 developer Dewitt Carolinas by H.I.G Realty Partners, an affiliate of H.I.G. Capital.

Ed Soccorso, CFO of Raleigh-based Dewitt Carolinas, said that by teaming up with H.I.G., Dewitt Carolinas was able to get a better rate on its Pier 33 debt, a common practice in apartment development to pay off construction debt as properties stabilize.

In the case of Pier 33, which cost about $80 million to build, the apartments are almost fully leased, Soccorso said.

The development also includes 20,000 square feet of retail, for which two tenants have signed up so far – an office for Port City Marina and a boat sales company.

"Hopefully with the rebirth of that whole downtown area up there in the north side with Live Nation [operator of the Live Oak Bank Pavilion at Riverfront Park] and other things, I think it’s really activated that area and we’ve been getting very good interest in our retail coming out of COVID," Soccorso said.

He said his company expects Pier 33 to be a long-term holding.

Dewitt Carolinas bought the vacant site for Pier 33 in 2014 and completed the apartments in 2020. Dewitt specializes in office, retail and multifamily development, along with construction management, property management and leasing.

Michael Mestel, managing director at H.I.G. Realty Partners, stated in a news release that with Pier 33, Dewitt Carolinas "built an exceptional product and we are looking forward to being a part of its continued strong performance.”

H.I.G. Realty Partners manages $8.2 billion in assets and focuses on small- to mid-cap real estate, targeting equity and debt investments across all property types throughout the U.S., Europe and Latin America, according to the release.