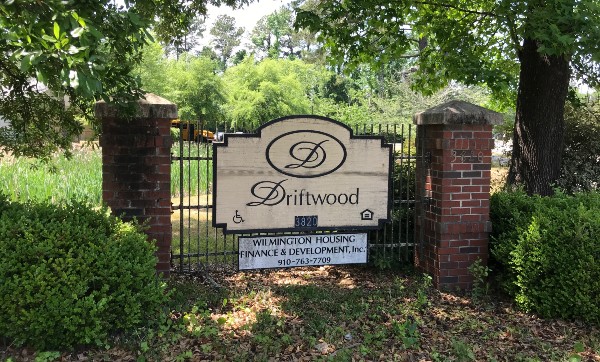 The Driftwood apartment complex off Princess Place Drive in Wilmington is under contract. (Photo by Cece Nunn)
A social impact nonprofit organization based in Wilmington is adding 15 more units to its ongoing effort to boost affordable housing in the area.

Cape Fear Collective (CFC) is under contract to buy Driftwood, a 15-unit apartment complex off Princess Place Drive, according to an announcement Tuesday.

Driftwood is a tax credit project developed 16 years ago by an affiliate of Jim Anthony of APG Capital and Betty Bisbee of Wilmington Housing Finance and Development to provide housing for chronically homeless residents, a news release stated.

In January, Jim Anthony and Wilmington Housing Finance and Development, dba Driftwood Wilmington LP, put the property on the market because it had become too costly to operate, according to the release.

CFC agreed in March to purchase Driftwood for $1.2 million, with Jim Anthony
offering to provide a $250,000 donation to assist with costs associated with the
preservation of affordable housing, the release stated. The deal is expected to close in June.

“Driftwood has been affordable and supportive housing in this community for
years,” said Patrick Brien, CEO of Cape Fear Collective, in the release. “Given the need for that type of housing in Wilmington, it was critical that it stay that way. We felt that CFC was uniquely positioned to protect the property through purchase.

"We're working alongside some great nonprofit partners to think through what the next chapter looks like for the community.”

According to the release, CFC will perform extensive renovations, and repairs will take a few months. CFC plans to have residents in the renovated units by early fall 2021, the release stated.

“A property like Driftwood is exactly why we launched our impact investing platform,” Brien said in the release. “The ability to move quickly, work with a seller to come to terms on a deal that will protect naturally occurring affordable housing, and then collaborate with nonprofit partners to ensure that people in need are able to access that housing provides a lot of opportunity for deals like this. We believe that housing should be attainable for all people and this is just us doing our part in that fight.”

Earlier this year, CFC announced that the initiative had purchased 20 other rental units for $1.8 million with the intent to repair them and maintain them as affordable units.