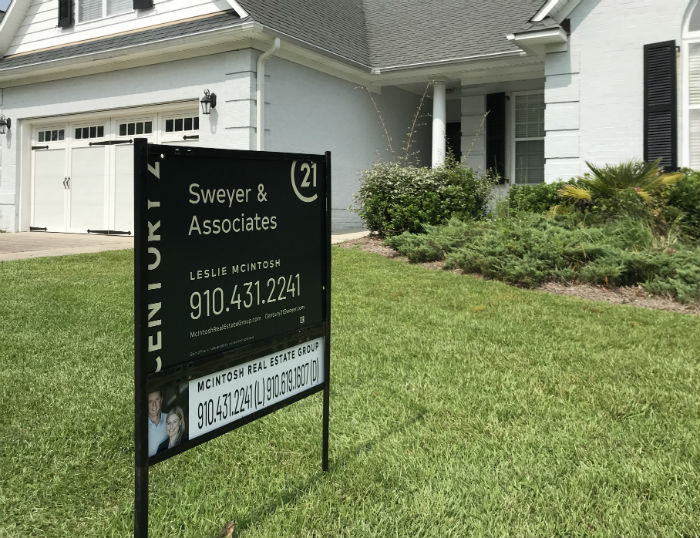 A home for sale on Royal Bonnet Drive off Military Cutoff Road in Wilmington. (Photo by Cece Nunn)
Like a rocket ship.

That’s how far home sales have soared, from a low in April in the local residential real estate market, to new highs, Realtors say.

“Coming into this year, we expected 2020 to be a better year than 2019,” said Trey Wallace, president of Intracoastal Realty Corp., during a Wilmington-Cape Fear Home Builders event this month. “But I think it's exceeded our wildest expectations despite what we've all been going through. Back in March, when COVID first hit, I can tell you that, at least for me, I was extremely concerned early on about the long-term effects of the virus.

“And we still don't know what the long-term effects are, but I expected to see an immediate downturn, which we did see, but it hit a bottom very quickly and shot up like a V-shaped recovery. It really came back sizzling hot.”

He added, “April was basically the bottom as far as sales and contracts, and then it just shot up from there like a rocket ship.”

The numbers, compiled from the N.C. regional Multiple Listing Service, also showed a 52% increase in pending sales, 6% increase in new listings and a 50% decrease in the months’ supply, from 2.1 to 4.2.

“We normally see housing activity begin to slow a bit during the back-to-school season, but this year is far from normal,” said CFR President Tony Harrington in a news release. “With mortgage rates remaining at record lows and strong buyer demand, Realtors are preparing for a busy housing market this fall.”

The month showed sharp increases in total sales volume, average sale prices and units sold compared to August 2019. The market has already exceeded $1 billion in total sales for 2020 and is 35.1% percent ahead of the 2019 pace through August, the release stated.

“Our market showed absolutely no signs of a cool-down in August,” said BCAR CEO Cynthia Walsh in the release. “In July, we saw the highest number of homes we’ve ever seen sold in a month, and August wasn’t far behind.

“Additionally, the inventory of available homes remains tight, with all signs pointing to a continued seller’s market as we move into fall.”

Is a slowdown inevitable?

“We're riding the high right now. I hope we continue to ride the high, but I think we're all expecting a cool down at some point,” Wallace said. “I don't think it will be anything life-changing or a 2008-type scenario, but it's definitely not sustainable in my personal opinion at this level.”

Preparing for whatever may come is important, he said.

One of the main challenges in the market currently is the low inventory of homes available, something that can be frustrating as real estate professionals in all facets of the industry work to keep up with demand.

Tim Milam, president of Coldwell Banker Sea Coast Advantage, who also spoke at the WCFHBA event, said “I think we've all got to be patient. We all need to be humble; we're all in this together . . . Patience is a real key thing.”

Buyers still snapping up homes in the region, Realtors report