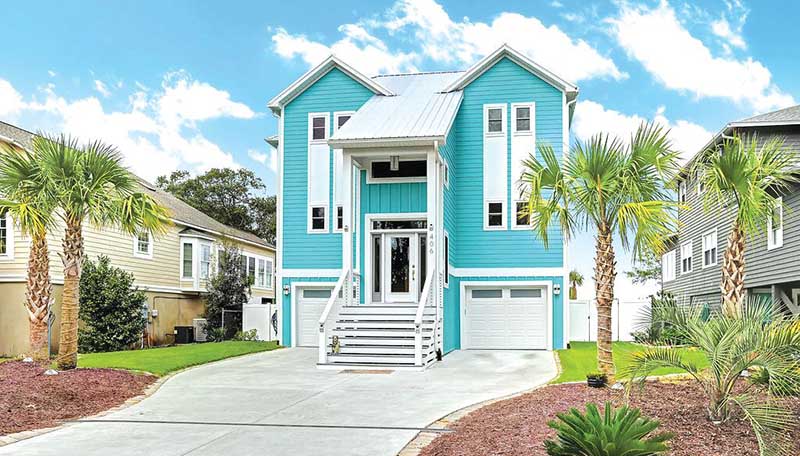 The five-bedroom luxury house at 406 W. Yacht Drive in Oak Island is listed for sale for $885,000. (Photo c/o Margaret Rudd & Associates)
At the height of the housing downturn, Brunwick County had 22 months of supply.

That situation had changed drastically by the end of 2019.

The months of residential supply for the county as whole at the end of last year was 4.72 months.

It was similar in two popular Brunswick County areas: 5.38 months for Oak Island, a beach town, and 4.66 for Southport, an historic city on the waterfront.

As of press time, experts were predicting that the coronavirus pandemic would most certainly have an impact on home sales in the region and nationwide, as it was having on every sector of the economy.

But before drastic measures were introduced in an effort to slow the spread of the highly contagious virus, sales in Brunswick County were thriving, topping $100 million in sales volume during the second month of 2020, according to a news release from the Brunswick County Association of Realtors.

“February’s sales numbers were so strong that I ran them multiple times to make sur ethey were accurate,” said BCAR CEO Cynthia Walsh in a release. “February was the strongest month we’ve seen in over 14 years.”

Referring to what has accounted for the popularity of the Southport/ Oak Island area, Goodman said, ‘If you look at Brunswick County, Southport is the only waterfront town with a downtown shopping district. That attracts shopping and tourism.

“Oak Island swells in the summer with vacation rentals that continue to return year after year,” Goodman said. “The area is inexpensive compared to other coast retreats.”

Boiling Spring Lakes, a town near Southport, has been another popular spot, even with one of some of its dams still in need of restoration after Hurricane Florence swept through the region in September 2018. “In 2018, Boiling Spring Lakes residential homes had 4.29 months of supply and in 2019, 3 months of supply,” Goodman said in an email. “I believe this is due to the price point. The median sale price in Boiling Springs Lake as of December 2019 was $163,575, while Southport was $325,000 and Oak Island came in at $315,250.”

In the past Boiling Springs Lakes’ price point has been a motivator, he said, and it is close to new shopping centers being built on N.C. 211. Additionally, he said, a new N.C. 133 shortcut allows easy access.

“But with the shortness of supply I would expect sales to decline in 2020,” Goodman said.

In another area close to Southport, how does St. James, a master planned community that is also an incorporated town, factor in?

“St. James continues to build new construction, which creates a higher level fo inventory. Their months of supply stands at 4.99, slightly higher than the other areas, and median sales price at the end of 2019 was $377,000,” Goodman said. “Their YTD home sales are 34 compared to 22 at this time last year. St. James remains a strong market.