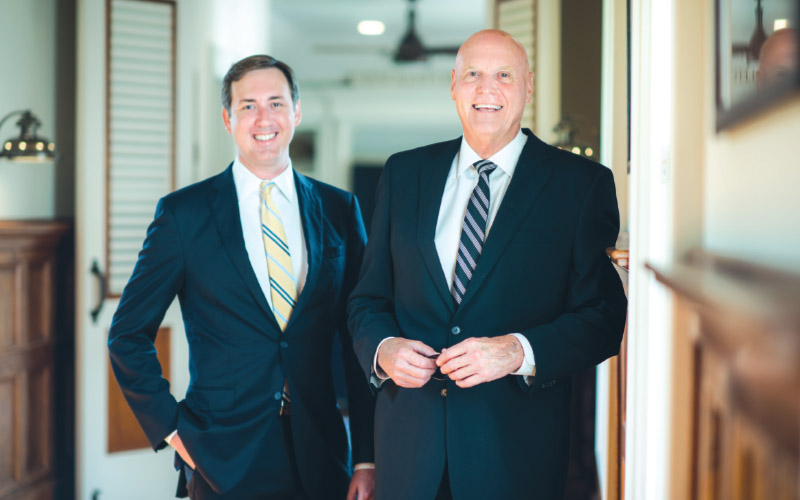 Those were two careers he was thinking of pursuing at one time in his life.

Instead, he got sold on the real estate industry, working his way up to the role of president of Intracoastal Realty. The firm was founded by his father, Jim Wallce, in 1976 and is today one of the largest real estate firms in the Wilmington area.

Real estate firms often include family ties or multiple generations working alongside each other, and examples abound in the Wilmington area, from Intracoastal to Coldwell Banker Sea Coast Advantage to Century 21 Sweyer & Associates and more. According to a 2019 real estate firm profile by the National Association of Realtors, 75 percent of residential real estate firms that responded reported family relationships among firm owners.

Trey Wallace, 34, started working at Intracoastal as a teenager in the company’s IT department, but his dad didn’t put any pressure on him to eventually make real estate his career.

“He was learning everything about our systems when he was 16 years old, and he was there helping our agents with their problems, you know, with computers and phones,” said Jim Wallace. “And so at that early age, he learned a lot about the business. But really, his decision to get into the business was totally his own.”

Trey Wallace, who had taken a real estate prelicensing course around 2006, was encouraged by Intracoastal agents Robbie Robinson and Marcello Caliva to join their team.

“That’s how he got into this business, really on his own, working with those guys, and he was enjoying it and doing it well,” Jim Wallace said. “A couple of years later [around 2014], I approached him and said, ‘Well, if you like this business, then maybe you ought to, you know, look at possibly coming into the business in the management side.’”

Milam got into the real estate business because of his brothers. He was working in banking in West Virginia when one of his brothers, Bruce, decided to try real estate as a career. Bruce, who had leukemia, had just undergone a bone marrow transplant and was ready to plan his future.

“He calls me one day and he goes, ‘Hey, I’m going to take a real estate class and get my license.’ Because that’s what he thought he might do if he had been healthy after the transplant. He said, ‘Why don’t you take the class with me?’ I’m like, ‘You’re crazy, man. I’m in banking’ … And I said, ‘No, I’m not doing that.’ It dawned on me after I hung up the phone, ‘Wait a minute; this is my brother who just had a bone marrow transplant. That was dumb. I should spend time with him.’”

Tim Milam didn’t end up using the license at the time. About a year and a half after they took the class, Bruce died at the age of 35 from leukemia. A little later, another brother, Paul, who had started a real estate firm in Wilmington in 1988, asked him if he would move to Wilmington and help him decide on a real estate franchise to buy. Tim Milam said he ended up advising his brother that he felt Coldwell Banker was the best one.

“I sold real estate from ’92 to ’94, and then was our top agent,” Tim Milam said. “And then in ’95, his [Paul’s] sales manager left. The agents asked me to be sales manager... I let them talk me into it. I did that for about a year and a half, and then I bought the company in January ’97 from my brother. He was good to me and taught me a lot of things.”

While Tim Milam’s son, Joey, did not go into home sales, he is a mortgage banker at Alpha Mortgage and works in the same building, Dungannon Village at Autumn Hall, as his father. Tim Milam’s daughter works for a title company and his son-inlaw is the marketing director for the Coldwell Banker Advantage office in Raleigh.

When Tim Milam first bought the business, the company had 50 agents and one office. These days, the firm has more than 600 agents and 21 offices across Southeastern North Carolina.

Trey Wallace said it might seem like there are more family relationships among those in real estate firms because many owners who started agencies decades ago are in or approaching times of transition.

Asked whether he thinks the company will be in good hands with Trey, Jim Wallace said, “It’s actually going to be in better hands. He’s doing an outstanding job. Trey has been doing all the heavy lifting for several years; He’s running the company. I’m here to be an adviser and consultant, but he’s really running the company and he has built a terrific rapport with our staff and our agents through his hard work and vision for the company.”

Family ties in the real estate industry also makes sense for other reasons.

Passing the real estate torch has advantages outside of a smooth transition, the Wallaces said.

“Most people when they leave home and they go off and get a job or a career somewhere, they, I would venture to say … spend less time with family. And in this case it’s been the total opposite,” Trey Wallace said. “I mean, we’re literally together every day and we don’t always agree on everything, but it’s a blessing to be able to spend this much time with him and learn. I think it’s a special thing that I don’t think a lot of people have the opportunity to do.”