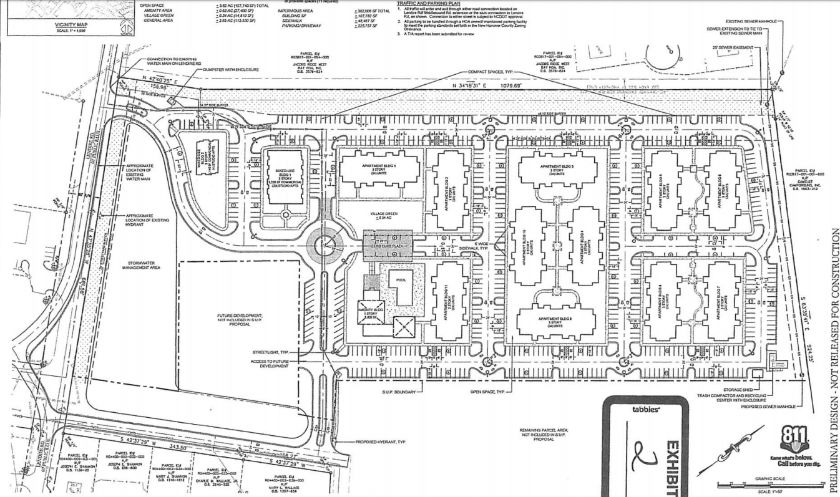 A site plan shows a dozen three-story buildings for a mixed-use project called Middle Sound West. (New Hanover County records)
On nearly 31 acres on Market Street in Wilmington, developers are proposing an apartment complex with 288 units and more than 7,400 square feet of office/retail space, according to a New Hanover County community meeting notice.

The project, which would be located at 7241 Market St., is titled Middle Sound West on a site plan included with the notice, which shows 12 three-story buildings, a two-story building and a one-story structure.

In a letter about the project, attorney Matthew Nichols said his client is requesting a special use permit (SUP) from the county for the project to allow residential uses within a commercial district.

While the entire site is nearly 31 acres, the SUP would apply to about 15 acres, the letter stated.

"The purpose of the meeting is to explain the proposed development and answer questions from meeting attendees," Nichols' letter stated. "The meeting is also open to the general public."

The owner of the property is listed as Coswald LLC on the site plan and in New Hanover County property tax records. Coswald LLC's members include Grathwol Property Holdings LLC of Wrightsville Beach, B. Leon Skinner of Wilmington and W&B Investments of Greensboro, according to state corporations records.

Efforts to reach Nichols and Walter Wilson, president of W&B Investments, were not successful Thursday.