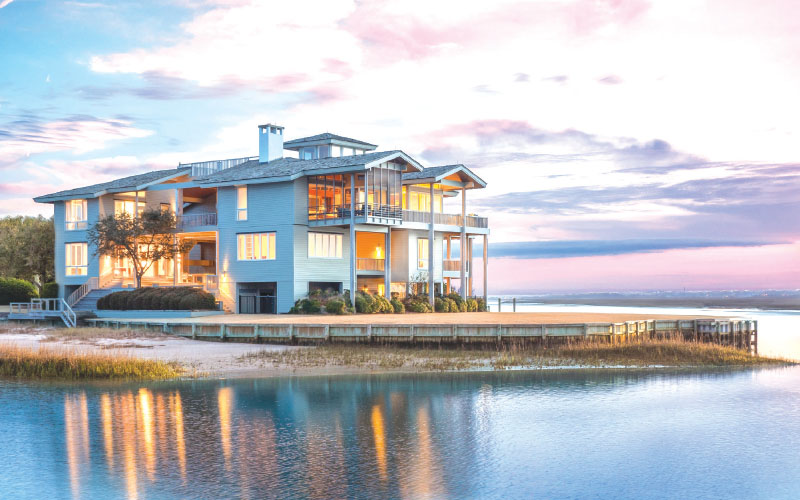 The Northens purchased a lot on the nearly 5-mile private island in 1986. Figure Eight, a thin, pristine barrier island just north of Wrightsville Beach, has no condos, no duplexes, no apartments and no commercial development.

It’s been home or vacation destination to celebrities, politicians and tycoons of various industries.

And no one is allowed across the island’s private bridge except property owners and their guests or vacationers with passes.

When the Northens first discovered Figure Eight through friends of theirs, Buzzy was a stock broker in Richmond, Virginia. Seven years ago, the couple moved here to sell real estate on Figure Eight under the umbrella of Intracoastal Realty.

The rest, as they say, is real estate history, one that’s been marked by healthy real estate careers for the couple.

Recently, they were involved as buyers’ agents in what was, as of press time, the most expensive luxury residential real estate sale of the year.

In a $4.8 million deal, the home at 49 Pipers Neck Road was purchased by Louise F. Brady and her husband, James E. Brady, of Greensboro, according to the deed dated May 21. The seller was 49 Pipers Neck LLC.

The 6,588-square-foot home located on a private peninsula and surrounded on three sides by water was listed by Nick Phillips of Wilmington- based Landmark Sotheby’s International Realty.

The home was built by Jim Farlow in 2000 for James “Chip” Mahan III, CEO and chairman of Live Oak Bancshares, and his family, and the Mahans sold it in 2005.

“Basically Mahan said, ‘Here’s the best lot on all of Figure Eight; let’s build something special on it,’” Northen said Friday.

Phillips said, “That house is really an iconic property on the island.”

He said the waterfront estate was designed by mid-century modern architect Ligon Flynn.

“I believe that house was really one of his finest works,” Phillips said.

The home was listed by Landmark Sotheby’s for $5.2 million and last sold during the pre-recession market of 2005 for $5.25 million, according to the N.C. Regional Multiple Listing Service and property tax records. The N.C. Regional MLS shows that the May 21 transaction is the highest- valued residential closed sale in the region so far, said Kathleen Baylies, broker in charge of Wilmington- based Just For Buyers Realty.

“It actually was under contract its first day on the market,” Phillips said. “It was such a spectacular property, truly one-of-a-kind.” 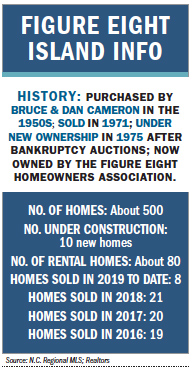 Buzzy Northen said Figure Eight Island’s success can be attributed to a number of factors, with defining moments including Hurricane Fran in 1996 and the establishment of Eagle Point Golf Club nearby on the mainland in the year 2000. After Fran, which was a Category 3 major hurricane, the damaged island showed resiliency with its survival.

Then, four years later, “the opening of a world class golf course here in Wilmington, a private course, the prestige of it, everything about it, and the fact that you had a private island a mile away just changed the perception. . . It brought in a whole new group of clients.”

The impact of Hurricane Florence is still evident in some cases, with tarps on roofs and workmen busy still completing repairs on the island. But it hasn’t seemed to slow interest, said Ellen Northen.

“We’re still recovering from the hurricane, but we’ve never been so busy,” she said.

Kirra Sutton of Figure Eight Realty said, “The market on Figure Eight has been very strong for the past several years.”

Figure Eight Realty is located on the island with an office in the yacht club’s facilities. Judy Parlatore is the broker in charge, and the agency also includes JoEl Skipper, Sutton said.

She said she keeps a close eye on the island’s home sales, which can number between 20 and 30 each year in stable and strong markets, via the N.C. Regional Multiple Listing Service and her own spreadsheet.

“There are certain locations and price points that we have limited inventory for, so that has been a bit of a price driver in those locations, but overall, the market has been very strong,” she said.

The Northens said oceanfront lots alone can cost $2.5 million. Soundfront lots with docks can cost $2.6 million on average, but none were for sale as of press time.

The number of sales this year so far (8 as of June 13) is a little bit lower than the 13 that had sold as of June last year. But two or three other sales are pending, Sutton said.

“So we’re on target,” she said. Buzzy Northen said, “It’s just slowly being discovered because there’s nothing else like it anywhere near here."