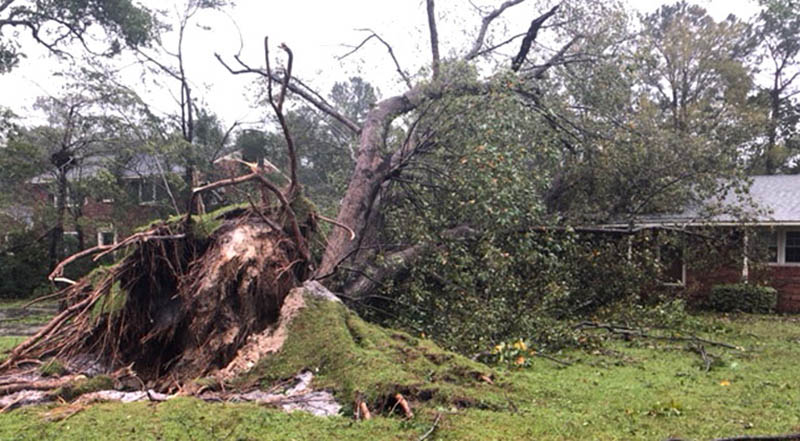 Hurricane season begins June 1, and with it comes the need for residents to prepare themselves and their homes as much as possible for potential storms like last year’s Hurricane Florence.

For Realtor Chris Baynes, of the Chris Baynes & Associates team with Wilmington-based Coldwell Banker Sea Coast Advantage, one of the first things that comes to mind when he’s asked about preparing a home for a hurricane is to start at the top.

“If you have an old or compromised roof and that kind of storm comes, the amount of damage is substantial,” Baynes said. “One of our team members, her house was basically a total loss and they had to tear it down to the studs.”

Another priority in advance planning should be flood insurance, he said, which is less expensive when your home is not located in a flood zone.

“All it takes is a drain to be stopped up somewhere downhill and substantial water comes in, rises up into your house, and you are going to find yourself faced with massive financial hardships if you don’t have flood insurance” that covers rising water, Baynes said.

When Hurricane Florence made landfall Sept. 14 near Wrightsville Beach last year, the storm’s rains lasted several days, flooding some areas and soaking the inside of homes and businesses where roofs had been peeled back by the hurricane’s winds. As a result, a number of homes were taken out of the real estate market’s inventory in New Hanover, Pender and Brunswick counties, where the supply was already tight.

By October, the three-county data in terms of the number of homes sold during the month compared to the same month in 2017 had shown some gains after its anticipated September drop. The monthly supply of homes dropped from 5.1 to 4.3 in October 2018, according to numbers listed on Cape Fear Realtors’ website.

In April this year, the months of inventory had dropped to 4.1, the CFR statistics show. Months of inventory or months of supply are generally defined as measures of how many months it is expected to take for an area’s current inventory of homes on the market to sell if sales continue at the same pace.

Prices have also been increasing in Wilmington and surrounding areas, with the three-county average rising to more than $296,000 in April compared to about $286,000 in April 2018, according to CFR.

As far as whether the storm has affected current home values, that remains to be seen, Baynes said.

“You have basically three types of property classes after a storm,” explained Baynes. “Properties that weren’t damaged at all, and those would actually see a bump up in value because they weren’t damaged, and there’s limited inventory available. The storm actually took some inventory off the market. It also made a lot of people homeless so they were trying to get into some other property.”

Then there’s homes that had water damage from the rooftop down. “That kind of damage was extensive,” Baynes said.

But those houses in many cases were rebuilt or are in the process of being rebuilt and could wind up in better shape than they were before, also signaling a potential increase in value, he said.

“What we don’t really know [in terms of home value impact] is about homes that had flooding that had never flooded before,” Baynes said. “It’s a little bit of a question mark.”

In other states that have experienced hurricane damage, including Texas, Florida and Louisiana, properties in that last category “did stay stigmatized for three to five years but did recover in values,” Baynes said.

He said the extent to which Florence damaged homes that seemed to be out of harm’s way in terms of flooding has led him to recommend insurance even more enthusiastically.

“While we typically don’t see houses that are not in flood zones flood, after this last event, it’s certainly going to compel me to strongly encourage people to purchase flood insurance whether they’re in a flood zone or not,” Baynes said.

When he gets questions from potential homebuyers about storms, Baynes said, “I just tell them, ‘You’re on the coast. One of the greatest things in the world is our coast, but we are also susceptible to getting storms. You just have to pay attention and prepare accordingly and be prepared to evacuate.’

“I think people understand that. That’s our thing ... in the Midwest, you have tornadoes.”