Shedding Light On The Affordability Gap 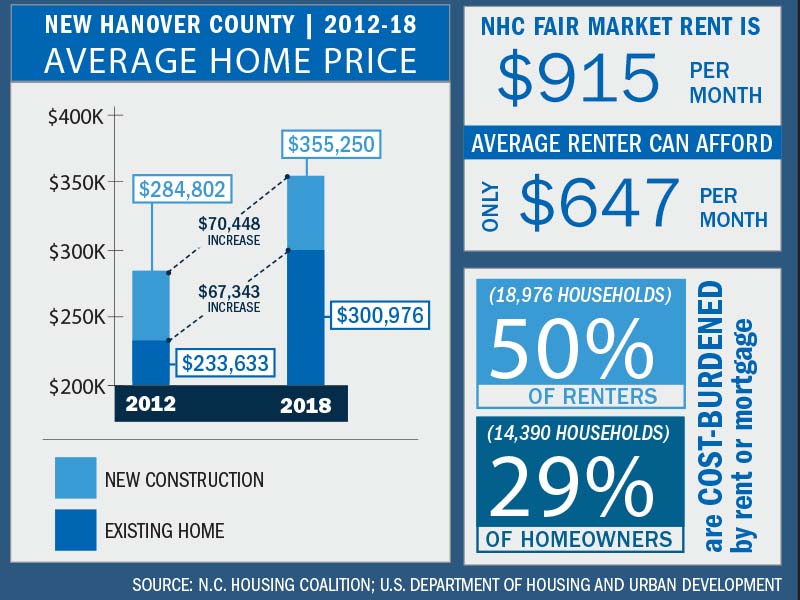 At the start of an event earlier this month, Cape Fear Realtors staff member Suzie Lude said, “The economic viability of the area hinges on this topic.”

The topic she was referring to is affordable housing in the Wilmington area.

In New Hanover County, for example, half of all renters are cost-burdened, meaning they pay more than 30 percent of their income to rent their homes, leaving fewer dollars to spend elsewhere in the community.

With home prices and rents on the rise in the Cape Fear region and wages not keeping up, the affordable housing issue is expected to remain a challenge, experts said during the Cape Fear Realtors Housing Affordability Summit on Jan. 9.

Average home prices have risen 22 to 30 percent in the tri-county area in the past six years, according to a report produced for Cape Fear Realtors and distributed at the summit, held at The Terraces on Sir Tyler in Wilmington.

Brunswick County’s average price of new homes rose by 23 percent from 2012 to 2018 and 22 percent for existing homes. More than half of all homes sold in the Cape Fear Region cost under $250,000, but demand is high at that price, resulting in the lowest supply in more than 14 years, the report stated.

Student loan debt is one barrier to homeownership, said Jessica Lautz, vice president of demographics and behavioral research for the National Association of Realtors. Lautz was one of the speakers during the summit in Wilmington.

“There’s absolutely individuals who’ve been left out of the housing market today, even though they want to enter the housing market,” Lautz said. “We see that eight in 10 nonowners today want to own a home in the future. Nine in 10 believe that home ownership as a concept is part of their American dream, but they’re having a hard time getting there today.”

Of those who are buying homes, they tend to be wealthier or have family help, among other factors, and some are buying multi-generational homes their parents and children can also live in, Lautz said.

In North Carolina, the state’s Housing Finance Agency offers help through NC Home Advantage Mortgage. Whether a buyer is purchasing for the first time or wants to move up to his or her next home, NC Home Advantage Mortgage offers down payment assistance of up to 5 percent of the loan amount to give them a purchase boost, according to materials provided at the summit and explained by the N.C. Housing Finance Agency’s Joshua Burton.

An applicant’s individual income cannot exceed $87,500, and he or she must have a credit score of 640 or higher.

Applicants must also be permanent legal residents of the U.S. and occupy the home (which must be in North Carolina) within 60 days of closing.

The city of Asheville has a number of programs aimed at addressing that area’s affordable housing issue, something a former Wilmington official is helping to achieve.

Paul D’Angelo, now housing development specialist for Asheville, previously was the chairman of the Cape Fear Housing Coalition, worked with the Wilmington Housing Authority and was director of affordable housing at Wilmington-based Tribute Properties.

D’Angelo shared details about what Asheville has been doing to address the city’s need to add affordable housing units to its inventory.

Measures include a $25 million housing bond passed by Asheville voters two years ago with $15 million set aside for three high-impact sites that can hold a lot of housing units and $5 million going into an existing housing trust fund.

Additionally, D’Angelo embarked on a regional tour to meet with developers in North Carolina, South Carolina and Tennessee.

“We went everywhere to tell people Asheville is open for business and we’re open for the business of affordable housing,” D’Angelo said. “We need more developers to come in and be part of the solution.”

He recommended that Wilmington develop a new municipal committee in some kind of partnership with New Hanover County.

The area’s affordable housing gap is also something that has been on the watch list of the Wilmington-Cape Fear Home Builders Association as land prices continue to rise and land availability continues to shrink.

“It’s been in front of us for a while. I think the report continues to shed light on the challenge,” said Cameron Moore, executive officer of the Wilmington- Cape Fear Home Builders Association.

He added that a potential source of help bridging the gap could lie in the development of Unified Development Ordinances (UDO). Both the city of Wilmington and New Hanover County are in the midst of the UDO process.

“Density and height are two terms that are going to have to be a part of both UDOs, the city’s and the county’s,” Moore said. “They have to interplay together to meet the affordable housing challenge head-on.”