A conceptual rendering shows the design for NoFo Lofts, a project planned for North Fourth Street that will include residential units with 20-foot-high ceilings and commercial space. (Images courtesy of Clark Hipp and Dave Nathans)
Developers involved in revitalization efforts on North Fourth Street in downtown Wilmington are planning a mixed-use project that would bring new purpose to a piece of property that’s been unused for decades.

Architect Clark Hipp has been designing the project, which has the working title of “NoFo Lofts,” on a wedge of vacant property bordered by North Fourth, Davis and Cowan streets. The multimillion-dollar plan is to create a residential and commercial building that mimics the historic nature of places like Brightleaf Square in downtown Durham, where shops and restaurants are located in a pair of historic tobacco warehouses.

Hipp said the idea is to use materials with an industrial feel – concrete, metal and brick – and incorporate high ceilings in six residential units for sale, sized at about 1,100 to 1,600 square feet, that buyers can customize with interior lofts holding additional bedrooms. The project is expected to include about 9,500

square feet of commercial space and a mix of retail and office tenants.

A major amenity for purchasers of the units, in addition to the ability to park under the building in a secure, controlled parking area, will be a green roof (conceptual drawing above) that includes an indoor kitchen and socializing space and outdoor areas for sunbathing and gatherings, a spot from which they can see the Cape Fear River or watch the fireworks on the Fourth of July, Hipp said.

Hipp is presenting NoFo Lofts next week during a Wilmington Downtown Inc. event, Downtown Growth: A Growler of Projects, that starts at 5:30 p.m. Oct. 19 at Coastline Conference Center. Other speakers include David McLamb of Poteat Hospitality on the development of an Aloft Hotel; Brian Wallace of MeetingHouse Properties; and Gene Merritt, who is developing a building at 200 Market St.

During his presentation, Hipp said, “I’m going to talk about where North Fourth Street was 17, 18 years ago.” 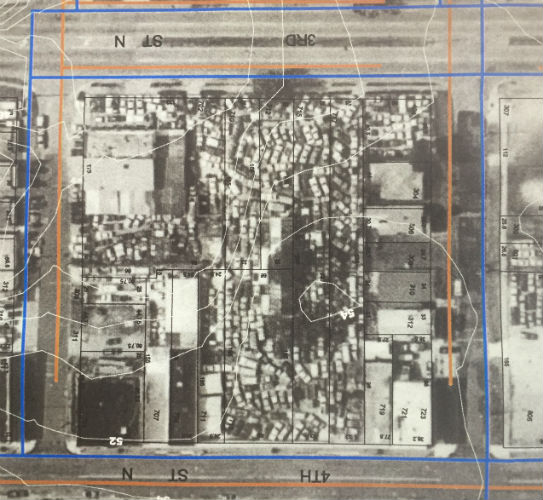 “When people talk about wanting to revitalize a neighborhood . . . it takes that kind of time. To me, it’s important in my presentation to point out the fact that it takes time, it takes consistency and it takes concerted effort,” Hipp said.

Nathans said when the junkyard was in operation, automobiles were piled up three-cars high.

“The removal of that junkyard was the catalyst for the redevelopment of the north side of town,” said Nathans, who has been involved in numerous projects on North Fourth St., including the building where baker Elaine Brown opened the Red Eye Bakery last year.

The creation of NoFo Lofts aims to continue that redevelopment and revitalization effort, Hipp and Nathans said. The property held a gas station at one time, but hasn't been used for anything in 30 or 40 years, Nathans said.

Construction on NoFo Lofts is expected to start in early 2018. Meanwhile, the buzz has already begun about the NoFo Lofts condominiums, which are expected to cost about $370,000 to $390,000 for a one-bedroom version.

“We haven’t even put them in the residential MLS [Multiple Listing Service] yet as a pre-sale, and I average a couple calls a day on them,” said Jeff Hovis, a residential and commercial broker with Intracoastal Realty.

Tickets for the WDI event where Hipp will talk about the NoFo Lofts project are $20 before Friday and available online.