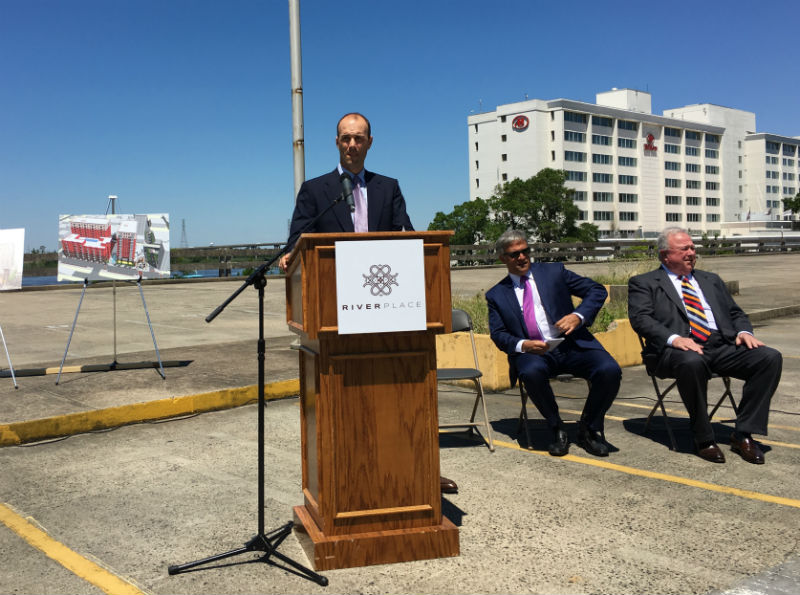 River Place Project Manager Lucien Ellison addresses those attending the ceremonial start Monday of the Water Street parking deck's demolition, which will make way for the 13-story mixed-use River Place project in downtown Wilmington. (Photo by Cece Nunn)
More than $23 million in condominiums and nearly half of the commercial space have already been spoken for in a major redevelopment project in downtown Wilmington.

"Sales and leasing has far exceeded our expectations. Over half of the residential spaces have sold," said Roger Perry, founder of East West Partners, the Chapel Hill-based firm redeveloping the Water Street deck into a mixed-use project called River Place.

Realtor Jimmy Hopkins of Intracoastal Realty has been in charge of the condo sales, and attributes pre-sale success in part to the project's "one-of-a-kind location."

"I knew it would be great, but it's been absolutely phenomenal, the response and the interest from locals," Hopkins said. "At this point, we're probably 65 percent local buyers." 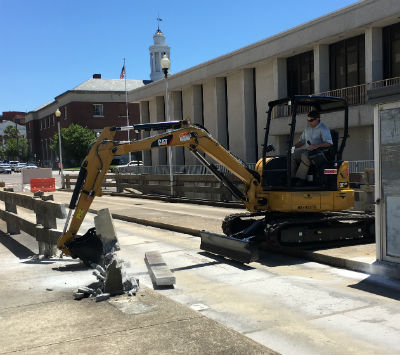 Monday, where a couple pieces of the deck were knocked down (pictured at right) in a symbolic gesture preceding more visible demolition that's expected to take place in the weeks to come. They included Keith Beatty, another Realtor at Intracoastal Realty, and Wilmington City Councilman Kevin O'Grady, whose historic home in downtown Wilmington is for sale.

O'Grady said buying a home in River Place fulfills a wish his wife, Diane, has had.

"She wants to go from historic to modern. This is modern," he said. "This gave us a chance to be downtown, really downtown, in a modern place with an elevator."

Beatty, who has a home in Parkside at Mayfaire, is an example of a kind of reverse trend Hopkins has seen with River Place sales of some local residents who have homes near or at the beach wanting another home downtown. That's different from what used to occur years ago when some downtown residents wanted places at the beach, Hopkins said.

Of the purchase, Beatty said, "I just have a lot of confidence in what's been going on here the last three or four years and what's planned for the future. I think it's going to be a vibrant place and a beautiful project."

Perry provided some insight into what it's taken to get the public-private partnership between East West and the city of Wilmington to this point. More than $3 million has already been invested, including the relocation of utilities, in what has been projected to be a $78 million development, $58.2 million coming from East West and more than $20 million from the city.

"This project is so incredibly complicated, without that kind of partnership and teamwork, we wouldn't have gotten it done," Perry said during his remarks at Monday's ceremony.

He praised the city's elected officials and staff.

"They've not been easy to deal with, but they've been fair to deal with. They've fiercely protected the interest of the city, both the elected officials and the staff, and at the same time they've worked in a very collegial and fair manner with us, and I think that's going to result in a project that not only works for us but more importantly works for your city as well," Perry said.

He said the project (rendering below) is still on track to be complete by the first quarter of 2019, at which buyers with the pre-sales contracts will close on their new homes. As for the demolition of the Water Street deck, the work can begin in earnest on tearing the old deck down 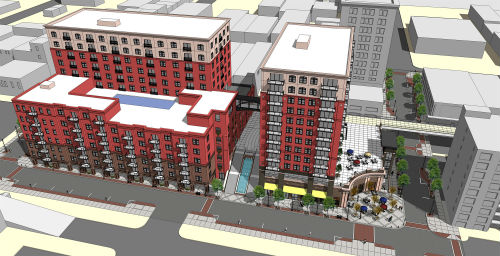 when additional details have been ironed out, including a new way to get in and out of the neighboring Cotton Exchange, for example, Perry said.

Commercial tenants in River Place so far include a new restaurant by Circa Restaurant Group owned by Ash Aziz, a more than 6,700-square-foot fitness studio by Axis Fitness and the newest to be announced, Rocket Fizz, a soda pop and candy shop. Patrick Riley, a broker with Wilmington-based Cape Fear Commercial, is in charge of leasing for the commercial space at River Place.

The redevelopment project has been a long time coming for Wilmington, said Mayor Bill Saffo on Monday.

"This deck was built in 1966. I was 6 years old, so this deck is I guess is about 51 years of age, and when we finally acquired it back, over turns and twists, we said, 'What should we do with it?' and former Council member [Laura] Padgett said, 'We should do something magnificent, something spectacular with it,'" said Saffo.

Padgett was among those in attendance at Monday's ceremony, along with other city council members and New Hanover County Commissioner Rob Zapple.

"Hopefully what we've been able to do with Mr. Perry and his group is to bring something to downtown that has never been seen before, at least since this Murchison Building was built many, many, many years ago," Saffo said of the historic building in front of the deck.

Barnhill Construction of Wilmington is the general contractor for River Place, and the architect is Craig Dishner of DMA Architecture in Winston-Salem. CJMW Architects of Winston-Salem designed the building interiors.

Project manager Lucien Ellison is a Wilmington builder who is bringing extensive construction management expertise, particularly in energy efficient construction, to the project, according to a news release.

"River Place is going to be another big leap forward for downtown, and it's going to bring over 235 residents to the area," Ellison said Monday. "And they're all going to contribute to a growing, live-work-play dynamic that is essential to a thriving downtown"