Top Of Their Real Estate Game 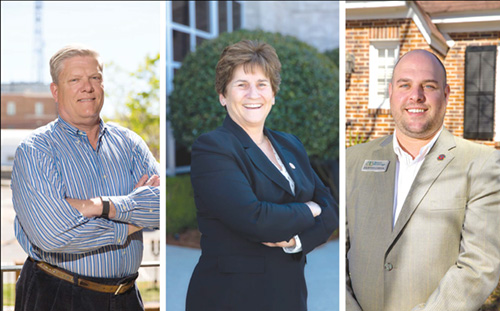 Todd Toconis (from left), Sherri Pickard and Clif Cheek share what it takes to make it as a Realtor. Local industry groups recently highlighted the three real estate professionals as top achievers for the year. (photos by Chris Brehmer)
By all accounts, selling real estate is a tough business. The point of entry may be relatively easy, but success is not. Various studies peg the first-year failure rate for new agents around 70 percent.

It’s also a crowded field. The National Association of Realtors (NAR) listed 1.2 million members at the beginning of 2017.

Agents are independent contractors working on commission while absorbing the expense of running their own businesses. Below are three real estate professionals who not only survived but were judged the best of the best by colleagues in 2016.

Real estate attracted Todd Toconis early on. Fresh out of college, he immediately joined the Army in 1982. During a visit home, he purchased a Carolina Beach townhouse as a rental property.

After leaving six years of regimented Army life, he was looking for less structure.
During his first job as the executive director of the Shaw Speaks Community Center in Wilmington, Toconis heard the siren call of real estate and started taking real estate classes.

“I liked the flexibility that real estate appeared to offer,” he said.

Toconis hit his stride quickly. He closed 60 transactions in one year, earning an award putting him in the top 1 percent of all agents. That award-winning trend continues for Toconis, 27 years after he began his real estate career in 1990. For the third year in a row, last year he was awarded WDI’s Top Producer of the Year Award.
In 2016, Toconis closed 19 transactions with an investment value of more than $2 million.

“Wilmington is a small town,” he said. “Remember that every Realtor that you meet, you’re going to work with them at some point. Keep the best relationships that you can with them – don’t ever burn bridges.”

Named Relator of the Year by Cape Fear Realtors

During a 15-year career coaching college basketball, Sherri Pickard ended up in New York City as head coach at New York University. While there she picked up an MBA and eventually decided to take a break from coaching. She opened a Blimpie Sub Shop with a partner.

Things did not go well. Pickard discovered too late that an extremely restrictive lease prevented her from making critical changes for her business to survive.

“We looked back in disbelief as to how it could have happened,” said the Graham, North Carolina, native.

Pickard took a year off. She researched what went wrong while considering returning to coaching. She then had an epiphany: She wanted to learn more about the commercial real estate business.

While visiting her sister in Wilmington, she decided to stay and pursue her new career. Pickard choose residential real estate instead of the commercial side.

“I realized that it just takes too long get up and running with commercial real estate,” she said.

Pickard soon found that coaching and selling real estate had a lot in common.

“From a 30,000-foot view, it’s very similar – problem solving, game planning and developing a strategy to help people meet their goals,” she said.

Her problem-solving skills and MBA were put to the test when she began specializing in distressed properties during the Great Recession.

“In 2009, I started working with underwater homeowners and uncooperative banks. I researched the situation and figured out how to make the situation a ‘win-win’ for both sides,” she said.

Three years ago, Pickard became the managing broker for the Wilmington office of Coldwell Banker Sea Coast Advantage. In this role, she has returned to coaching – not college athletes but aspiring real estate agents. The critical traits for success, according to Pickard, are a strong work ethic and self-motivation.

“You are the owner and the boss – you need the drive,” said Pickard, who served in 2015 as the president of the Wilmington Regional Association of Realtors, now known as Cape Fear Realtors. “Just like in coaching, you can have the ability, but you need the drive.”

Named Realtor of the Year by Brunswick County Association of Realtors

Growing up Clif Cheek wanted to be an architect. It never happened. Instead the steady pull of parents who were both in real estate seeped into his soul.

“My mom got into real estate when she was mayor of Ocean Isle Beach in the ’90s. I was thrown into understanding things about the industry. She would use us as her assistants helping with snail mail marketing,” Cheek said.

Before heading off to college in 1999, he completed a real estate course. Close to the end of completing his degree, he decided to take a semester off from school.

Instead of returning to school, he got his real estate license.

“I found I loved the industry and helping people make what is probably their largest purchase. I did well and decided not to finish up school at the time,” Cheek said.

“It was just him and me. Today we have 24 agents with offices in Ocean Isle Beach and Wilmington,” said Cheek, who is president of the newly formed North Carolina Regional MLS.

As president-elect of the Brunswick County Association of Realtors and a board member for the Brunswick County Chamber of Commerce, Cheek continues to support the industry and his community. He is also finally finishing up his college degree at University of North Carolina Wilmington and has only two courses to go.

He said receiving the recent award from BCAR was an honor.

“I’ve become more involved at the local and state level,” he said, “and being recognized for that is my proudest moment.”