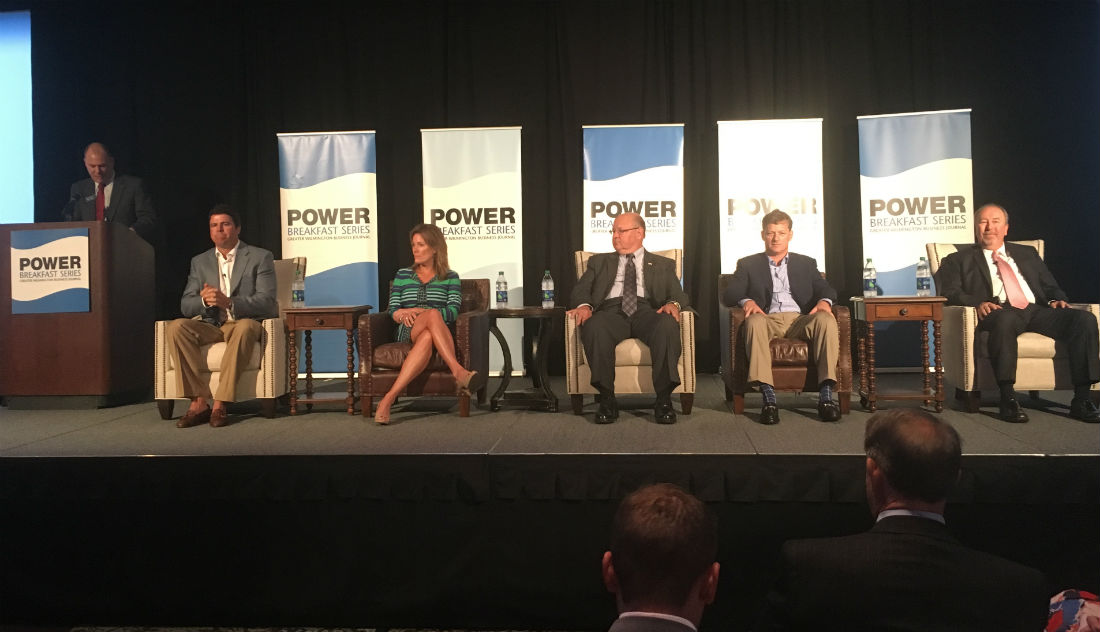 A panel of leaders and officials directly involved in or affiliated with some of the area's biggest projects shared updates and insights at Tuesday's Power Breakfast at the Wilmington Convention Center. (Photo by Cece Nunn)
What’s coming soon to the Wilmington area includes thousands of new homes and businesses, a transformed downtown and what's expected to be an improved industrial corridor, along with the challenges that such development can pose, panelists said at an event Tuesday morning.

The panel of five spoke to an audience of more than 600 local leaders and members of the business community during “The Next Big Things” Power Breakfast on Tuesday morning, hosted by the Greater Wilmington Business Journal at the Wilmington Convention Center.

“The Next Big Things” addressed during the session included master planned communities – 1,300-acre Blake Farm in Pender County, the 1,400-acre “mini-city” of RiverLights on River Road in the city of Wilmington and the nearly 600-acre Barclay development in midtown Wilmington – along with the area’s main industrial corridor of U.S. 421 and Wilmington’s changing downtown landscape.

About 1,800 single-family detached homes, 240 market rate apartments, senior housing, a 50- to 75-room hotel and event component, 300,000 square feet of retail at the entrance and YMCA facilities are among the features planned for Blake Farm, said Blake Frazier, vice president of sales for Fonville Morisey Barefoot, who is providing sales and marketing for Blake Farm and other Trask Land Co. developments.

“Development work is already under way" for Blake Farm, Frazier said, and a builder team is being finalized, with a goal of having lots on the ground by the first quarter of 2017.

In New Hanover County, RiverLights developer Newland Communities bought the property 10 years ago from the Cameron family, but the project was put on hold because the economy had not come back from the Great Recession at that time, said Livian Jones, vice president of operations for RiverLights.

The community is entitled to build 2,700 homes and 1 million square feet of commercial space, although Newland anticipates only incorporating about 250,000 to 300,000 square feet of retail/commercial space into the development, Jones said. An amenity called Marina Village, a 25,000-square-foot mixed-use building that will include some retail, is underway.

“We’ll be more of a local tenant mix, niche market ... We are working real hard at the tenant mix. We will have three restaurants there from day one,” she said.

Hill Rogers of Cameron Management said the commercial portion of another big development underway in Wilmington, The Pointe at Barclay, will be 34 acres anchored by a 14-screen Stone Theatres movie theater expected to be complete by January 2017. The Pointe will also include 250,000 square feet in what’s anticipated to be an entertainment and dining destination with small-shop retail and a grocery store, Rogers said.

Single-family homes and townhomes are under construction in The Forks at Barclay across the street from The Pointe site, and 80 percent of the buyers of those homes have been Wilmington residents, Rogers said. Apartments are also on the way.

“We’re sort of building a city within a city,” Rogers said, echoing Jones’ “mini-city” description of RiverLights. “We’re trying to create a brand.”

Panelist Ed Wolverton, president and CEO of Wilmington Downtown Inc., pointed out a few of the many changes going on in downtown Wilmington, including major apartment building and park plans in northern downtown.

Of the city’s proposal to build North Waterfront Park, he said, “This is an amazing opportunity for our community. Great cities have great urban spaces ... We are integrating a park that could, in fact, attract more development,” Wolverton said.

“It’s a big deal, finally, to get something going on this project that has been fallow for so long,” Wolverton said.

Another of the “Next Big Things” featured Tuesday morning was industrial development on U.S. 421, with Richard Nordt, vice president of ACME Smoked Fish, addressing the subject from his company’s experience.

ACME opened a plant at Pender Commerce Park in Pender County in February 2015 but had looked at 11 different locations before being drawn to the commerce park by Duke Energy and site consultants, Nordt said.

He said the workforce availability, boosted by Cape Fear Community College and the University of North Carolina Wilmington, along with the location and readiness of the commerce park to accommodate the plant were factors in ACME’s decision. A project included in New Hanover County’s budget for the fiscal year that starts July 1 is the extension of water and sewer service from the Isabel Holmes Bridge to the Pender County line.

“Looking at a site form a company perspective, it’s very important to look at the infrastructure. We looked at this location; we looked at the ease of in-and-out from New York through ILM; we looked at our seafood coming in from Chile through the Port of Wilmington,” Nordt said. “This was very, very instrumental in the dynamics and the demographics of this area for us making the decision to settle here in North Carolina.”

He said Pender County has invested almost $35 million so far in the park for infrastructure improvements and more tenants are expected to join the area soon. Nordt said ACME wants to continue to help foster economic growth in the tri-county region, from which it draws many of its 140 employees.

Asked about the biggest challenges the individual projects have faced, Jones’ answer was utility permitting.

“We develop across the country. We’ve busted our schedule twice, double the time of any other project, and it’s been a struggle reporting that to my investors,” Jones said. “But ... we’re working with the government entities on that and have developed an advisory council and board to try and offer suggestions and to figure out the processes and if there’s things that we can do, our engineer can do, to make it easier. So we’re working through that and hopefully our second, third and fourth phase will go a little quicker.”

Frazier said timing in general is a major concern of any new development because, in some cases, for unknowns such as what retail might look like in the next two decades.

“Are people going to shop at a store 20 years from now?” Frazier asked.

Add to that the economy’s usual cycles, panelists said.

“You could start when the economy’s good, and you can finish when there’s a recession,” Rogers said.

From a downtown perspective, Wolverton said, “Part of our challenge is we've got to continue to tend the garden.”

Elaborating on the theme, he said there are more than 900 businesses in downtown Wilmington.

“We have to continue to work with those small entrepreneurs to nurture their businesses, make sure they’re doing well,” Wolverton said.

The panelists said the creation of new jobs in the community will be key to the area's success, with the infrastructure improvements on U.S. 421 expected to have an impact once water and sewer service has been established along the length of the corridor, an upgrade the county estimates to be done by July 2019.

At the same time, builders and developers are facing a shortage of skilled laborers for homes and other building projects, panelists said.

"It's something we're trying to address, but it's definitely going to be a struggle in the next few years," said Jones, who prefaced her statement by saying that she participated in a recent meeting between groups involved in the building community, including the Wilmington-Cape Fear Home Builders Association and CFCC on mentorship and entrepreneurship opportunities within the building industry.