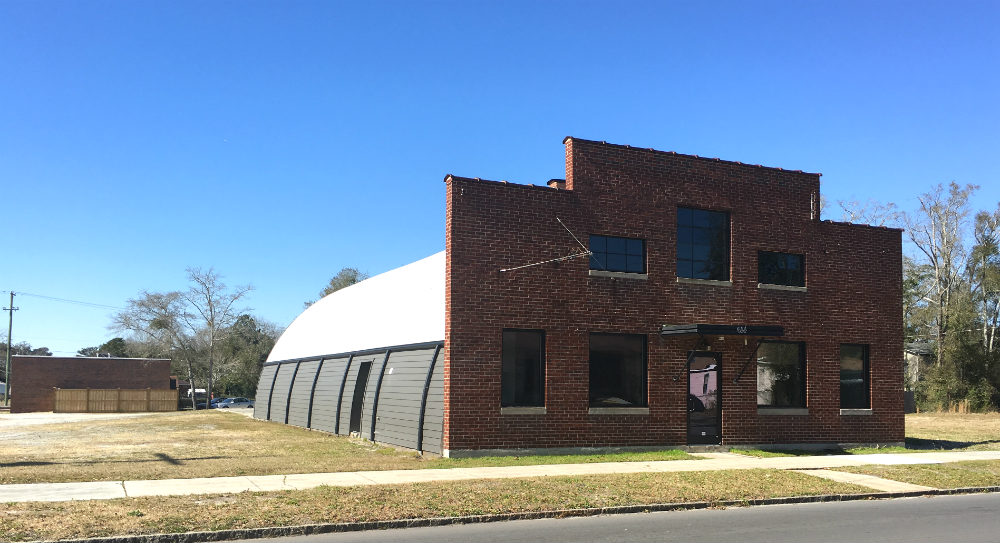 The Quonset hut at 614 S. 16th St., which has undergone renovations in the decades since its construction just after World War II, is incorporated in plans for a proposed mixed-use development. (Photo by Cece Nunn)
Although he’s worked on traditional apartment complexes as a subcontractor in the past, a Wilmington resident and business owner envisions a different kind of project on property he’s bought over the past two years near his Queen Street home.

The community, dubbed on site plans by JBS Consulting as "Square One," is expected to consist of 50 to 70 apartments in five buildings, along with some retail and office space in the nearly 70-year-old Quonset hut at 614 S. 16th St., said Smith, owner of L S Smith Inc.

Shipping containers would be used in the construction of the apartment buildings as well as office space in the Quonset hut, Smith said.

Two of the five apartment buildings would be three stories and situated on either side of the Quonset hut, site plans show. Known for their use by the U.S. Navy during World War II because they were light, easy-to-build structures, numerous historical sources say Quonset huts were named after Quonset Pointe, a peninsula and the former site of a naval base in Rhode Island where the structures were first made in the U.S.

But the building at 614 S. 16th St. in Wilmington was a post-war creation. Joe Sheppard, records keeper in the North Carolina room at the New Hanover County Public Library, said a construction company was granted a permit in 1947 to build the Quonset hut at 16th and Queen streets for offices and a warehouse, according to an article Sheppard cited from The Wilmington Post, dated March 26, 1947.

Smith said it’s always been his aim to save the building, which his development company bought last year.

“To get rid of it felt like taking a piece of Wilmington that you’d never get back,” Smith said.

He said he envisions the offices inside the landmark as co-working space that could be used by the apartment dwellers there and also plans to include a pavilion behind the Quonset hut with pergolas and hook-ups for food trucks.

"I think you can mix the urban, modern feel with these surroundings," Smith said as he stood on the site Wednesday morning.

The plans for Square One could be reviewed by the city of Wilmington’s Technical Review Committee as early as March 3, according to the city’s project tracking website.