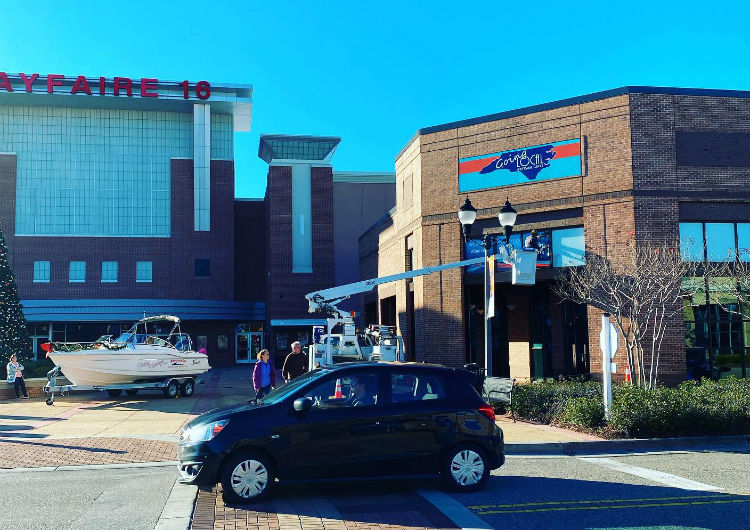 Going Local's sign is installed in a former restaurant space in front of the movie theater at Mayfaire Town Center. (Photo courtesy of Going Local)

The store’s move marks its third location in the center, which is mainly filled with national chain restaurants and retailers. The new space, at 890 Town Center Drive, formerly held Symposium, a Greek restaurant that closed last year.

Going Local is expected to open its doors in the revamped space on Friday, with an official grand opening to be scheduled later, said owner Michelle Conely.

In addition to offering art and gifts from 100 artists, the business is expected to soon start serving wine and eventually beer.

“In the meantime, we’ll give away free wine,” Conely said Tuesday.

The new space, she said, is comparable to the former J. Crew store but has a different layout and an art deco feel.

“And also we have a full seated bar. We’re not going to utilize the kitchen,” Conely said. “Any food we do is going to be brought in, catered in.”

The business might team up with local chefs, she said.

Other changes include more than just new vendors.

The presence of the local store at Mayfaire has been well received by shoppers, Conely said.

"We do hope to be here a long time," she said. "We appreciate that everyone supports what we’re doing, and the artists are grateful for what we’ve been able to provide for them as a venue."