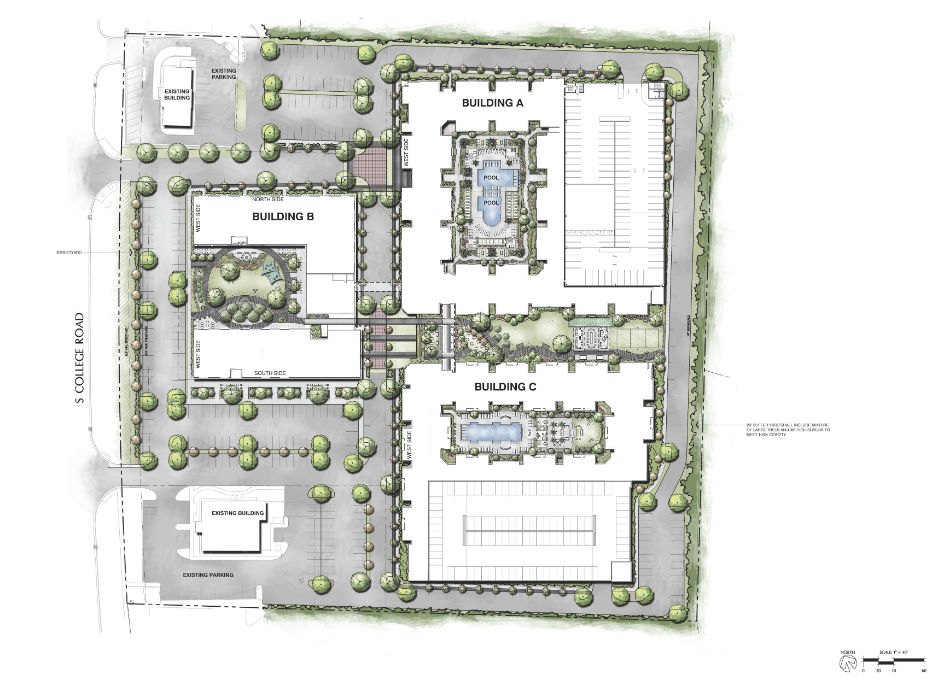 Site plans have been submitted to the city of Wilmington for The Hamilton, named after UNCW's first president, Thomas Tristram Hamilton Jr., to redevelop the former Kmart site.
Developers plan to build student housing and commercial space on the former Kmart property near the University of North Carolina Wilmington at 815 South College Road.

Wilmington-based GHK Cape Fear Development and Capstone Collegiate Communities, a Birmingham, Alabama-based student housing development company, are partnering on The Hamilton, a student housing complex expected to include up to 899 student beds in one-, two- and four-bedroom apartments.

The mixed-use project will also include 28,000 square feet of restaurant and retail space. The developers have submitted site plans to the city of Wilmington for technical review, but no new zoning is required to build The Hamilton on the 12.7-acre property.

"We typically do not talk about our development while we’re in our due diligence phase; however, in order to meet our target [completion] date of August 2019, we had to go ahead and submit our plans while completing our due diligence," said Brian Eckel, partner in GHK Cape Fear, on Wednesday.

"We’ve been studying the student housing market for years and looking for the right opportunity. We think this site is exactly that, arguably the best student housing location in the market with direct pedestrian access to the college [UNCW] without crossing College Road," Eckel said. "And we also believe we found the right partner in Capstone Collegiate Communities who shares a passion for developing high-quality projects and has a  proven track record with having developed over 32,000 beds."

Jack A. Sneeden Corp. is the current owner of the property where The Hamilton will be built. The Wilmington Kmart on the site closed in March, after Sears Holdings announced in January that it would be closing more stores.

The Hamilton is named after Thomas Tristram Hamilton Jr., the first president of Wilmington College, which became UNCW in 1969. UNCW's enrollment figure this year is nearly 16,500.

UNCW's growth is one of the factors that drew Capstone Collegiate Communities, also known as C3, to the city.

"This year, they grew by another 750, 800 kids. The enrollment certainly remains stong," said Mike Baker, executive vice president of development for C3. "We definitely like the market."

In North Carolina, C3 opened The Cottages of Boone in Boone in 2013 and Valentine Commons in Raleigh in 2012. Last year, the company had proposed a student housing project that would have been called The Cottages of Wilmington at the former Oleander Golf Center on Oleander Drive, but city officials did not approve the necessary rezoning request.

Baker said the estimated completion date for the first of two phases of The Hamilton is August 2019. Each phase will have swimming pools, and parking decks are also part of the plans, Baker said.

The Hamilton's site plans, slated for review by the city's Technical Review Committee on Oct. 19, show that two parking decks would contain 1,048 spaces, and elevated bridges would connect the complex's buildings.