City Staff's Report Weighs In On The Avenue Proposal 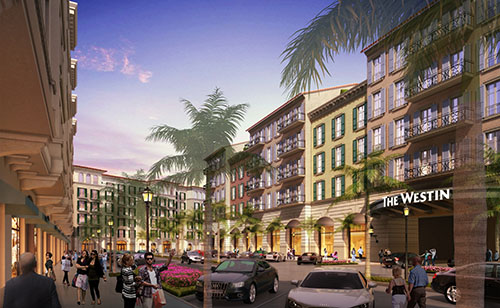 A Westin hotel and conference center would be the centerpiece of The Avenue, proposed by The Carroll Companies on Military Cutoff Road. (Rendering courtesy of The Carroll Companies)
A Wilmington city staff report on a $200 million mixed-use project planned for Military Cutoff Road says transportation concerns about the proposed development "outweigh the economic benefits" and calls the proposed site "the wrong location."

Carroll, CEO, founder and president of Greensboro-based The Carroll Companies, said he and his team have been working for two years on a plan that could bring a $70 million Westin hotel and conference center, along with apartments, boutique stores and offices, to 44 acres on Military Cutoff Road. The development would be called The Avenue.

Released this week, the city staff's report on The Avenue, produced for the July 12 Wilmington Planning Commission meeting, says, "In sum, the proposal is a major destination-type project in the wrong location with insufficient road system connectivity to distribute the heavy traffic volumes generated by the development. Despite efforts by the applicant to mitigate the development’s traffic impact on Military Cutoff Road, the projected 40+ % increase in traffic on a critical, already heavily congested major thoroughfare is the overriding issue that must be given precedence."

Carroll said Friday that The Avenue is not a major destination-type development, but rather a live-work-play mixed-use project that would be built in phases over 10 years, starting with The Westin.

“We have invested a considerable amount of time and money on traffic analysis,” Carroll said in an email Friday. “We would not be interested in building this development if we felt that traffic on MCO [Military Cutoff Road] would not be improved above its current status upon the building of each phase of this development.”

Carroll said the boutique shops The Carroll Companies plan to attract to the development “do not generate the traffic on a per-square-foot basis that a grocery store or a Target or a Walmart does, but we’ve been held to that standard.”

Carroll said his firm’s disagreements with the staff report will be explained at the Planning Commission meeting July 12, where the panel will consider whether to recommend approval or denial of a conditional district rezoning request and special use permit request to increase height limits up to 75 feet for The Avenue.

The staff’s report does not include a recommendation for approval or denial on the rezoning, which would change the property from Manufactured Housing Park District (MHP) and Special Highway Overlay District (SHOD) to Urban Mixed-Use (UMX). That's because the rezoning is directly tied to the SUP request, a decision that has to be made in a quasi-judicial proceeding based on evidence alone, city officials said.

Also because of the SUP request, the matter is expected to go before the Wilmington City Council, likely in August, whether the Planning Commission recommends approval or denial. The City Council has the ultimate say on SUP requests.

Jeff Walton, associate planner with the city of Wilmington, said an increase in traffic on Military Cutoff Road was the major concern as the staff prepared the report on The Avenue.

The proposal's Traffic Impact Analysis (TIA) received approval, with conditions related to improvements, from city and state transportation officials in June. Carroll said The Carroll Companies plans to spend $1 million to install traffic improvements on Military Cutoff Road, including adding more lanes for more than a quarter of a mile.

Carroll shared other plans for The Avenue on Friday, including his team's efforts to bring a world-class spa to the development. The Westin is the centerpiece of the development, which will feature Mediterranean architecture, terra cotta roofs, gas street lamps and palm tree-lined streets. He said in addition to the spa, the 250-room Westin is expected to feature a full-service restaurant, a wedding venue that can accommodate multiple weddings at one time, and 25,000-square-foot conference rooms that would be able to host conferences with 1,000 attendees.

Carroll said his company has "turned away 'big box' type retailers for the shops on the lower level of the residential units."

The Carroll Companies purchased more than 30 acres of the site where The Avenue is proposed, including the Hidden Lakes Mobile Home Park, last year.

"We will give an extended notice to the people in the trailer park as to when we need them to vacate," Carroll said in Friday's email. "We have already stopped allowing new people to move in. We are also looking at a financial assistance program for the residents of the trailer park to assist in their moving expenses."

Carroll said he has envisioned The Avenue as a "legacy project."

"We had to spend a lot of time wining and dining The Westin folks in order to attract them to come to Wilmington, and I can tell you they really like that area, but they didn't like a hotel just sitting on Military Cutoff by itself," Carroll said. "When we were able to develop the plan to integrate that hotel conference center in that location with a lot of other exciting things going around it, that's what sealed the deal with The Westin. Otherwise, we'd be talking about something a lot smaller and a lot less exciting that probably, there's already a lot of in Wilmington."