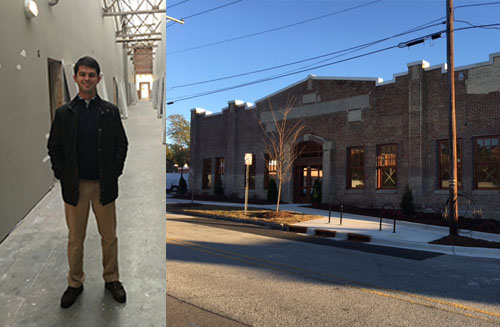 Mark Maynard Jr., co-director of Tribute Investment & Development Inc., stands inside apartments under construction at South Front Phase II, a growing complex on South Third Street. (photo,left, by Cece Nunn, photo, right, c/o Momentum Companies)
Since the community opened nearly five years ago, the owners of South Front Apartments have had a waiting list of people who want to live there.

The development transformed a vacant and dilapidated public housing project on the south side of downtown Wilmington, Nesbitt Courts, into a successful multi-family venture. These days, the same development company is finishing adjacent apartments and commercial space in South Front Phase II, a refurbished former industrial property at 1510 S. Third St.

“Based on the success of the first phase, we wanted to continue the momentum we had here and add some more commercial space. We felt it would make it an even more vibrant community,” said Mark Maynard Jr., co-director of Tribute Investment & Development Inc.

When finished, South Front Phase II will contain 54 apartments: 10 two-bedroom units and 44 lofts and flats. In a recent interview at the site, Maynard said quite a few of the apartments have already been leased, and two are occupied.

Eight one-bedroom apartments are expected to be finished by next week.

The first commercial tenant for the redevelopment project was announced earlier this month: Chef Vivian Howard and Ben Knight, the couple who own Chef & the Farmer in Kinston and star in the PBS show A Chef’s Life, recently signed a lease for a 3,700-square-foot portion of the property at 206 Greenfield St.

Their restaurant, Benny’s Big Time Pizzeria, is expected to be serving wood-fired pizzas to customers by late summer or early fall of next year, Maynard said. He said he met with Howard and Knight recently to discuss the design of the building.

“It’s fascinating just to hear them talk about their vision for the space,” Maynard said.

An 18,000-square-foot building where Capps Industrial Supply is located on a neighboring parcel will be home to a few new tenants, including possibly a grocery store.

On the same piece of L-shaped property, a white building will be demolished to make room for two restaurants that will face Greenfield Street behind the Satellite Bar and Lounge. Tribute has submitted a request to the city to rezone the property from a light industrial designation to Urban Mixed Use, a request that is expected to be considered by the city’s planning commission on Jan. 4.

Originally, the South Front Phase II property housed Wilmington Printing Company and was then home to the Block Shirt Company, which closed in the 1990s.

Maynard’s father, Mark Maynard Sr., bought the property in 1999, and part of it was home to the corporate office of the Maynards’ Tribute Companies. The rest was leased to various tenants.

Mark Maynard Jr. is leading the development of South Front Phase II for Tribute. While the company is also known for building new apartments, including hundreds of units under construction in Wilmington, Maynard is used to the ins and outs of working with historic properties.

The historical nature of the buildings in South Front Phase II is part of the decor, with exposed wooden trusses in the two-bedroom apartments, for example. Amenities will include a conference room, cross training-style gym with a couple hundred preprogrammed workouts, poker room, pet wash and billiards.

A pocket garden within the community will include a sculpture by Michael Van Hout, a Wilmington artist who works with wire. He’s also completing a mural that will cover an entire wall in the entrance to South Front Phase II that pays homage to the building’s shirt factory history.

“There’s nothing else like it in Wilmington,” Mark Maynard Jr. said.

Transforming a depressed portion of town isn’t a challenge every developer takes on.

“It just takes a certain insight, I think, to be able to pull that off, and obviously Mr. Maynard has that insight,” said Glenn Harbeck, the city’s director of planning, development and transportation, of Mark Maynard Sr. and South Front Apartments.

Of the time when Tribute was first planning the apartment community, Mark Maynard Jr. said, “I think people thought my dad was insane.”

Mark Maynard Sr. purchased the 13-acre former Nesbitt Courts property from the Wilmington Housing Authority for about $1.6 million in 2010 and began the work of transforming the buildings, constructed in 1940, into apartments while preserving their exteriors.

In the end, the investment paid off. These days, South Front Apartments is cited as an example of a successful redevelopment project by other developers and city officials. In 2012, Wilmington-based Cothran Harris Architecture won that year’s AIA North Carolina Tower Award for the design of South Front Apartments.

The report goes on to say, “Since much of the housing was intended to be temporary and is now over 60 years old, there may be opportunities for large-scale redevelopment, partial redevelopment, or adaptive reuse.”

“We’re excited because if you look at the structure of our city, obviously, the downtown core is very healthy. All kinds of businesses are moving downtown these days, and we’ve got these extensions out from the downtown that are having a real impact – going north from downtown to the northern waterfront area, Market Street going east, which has always bene fairly healthy,” Harbeck said. “And now we’ve got South Third Street and Front Street with an anchor down there. South Front Street Apartments and the related development is really creating a great anchor at that end of town.

“Really, it’s a gateway to the heart of Wilmington.”

Harbeck said the city is glad to see investors like Tribute in the area, and hopes more will come, especially to properties outside of Tribute’s holdings heading toward Wooster Street. “I think there’s opportunity for even greater investment,” he said.