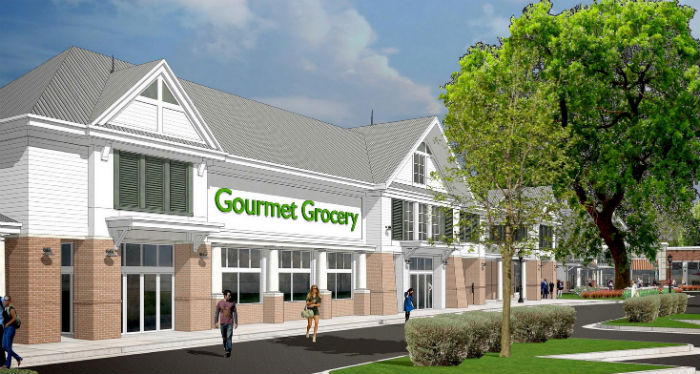 A rendering gives an idea of what the Publix-anchored Ogden Market Place, at Market Street and Middle Sound Loop Road, is expected to look like. (Courtesy of Halpern Enterprises Inc.)
Publix Super Markets has signed a lease for an Ogden location of the growing grocery store chain, according to an announcement from the company Thursday.

The 45,000-square-foot store is expected to open in late 2017 at Ogden Market Place, said Kim Reynolds, media and community relations manager for the company's Charlotte division, in an email.

The shopping center, which in addition to the Publix anchor will include 30,000 square feet of retail space, is not yet under construction, and it will take about 12 months to build once it starts, said Charlie Worthen, principal at the company developing the center, Halpern Enterprises Inc.

Ogden Market Place will be located at the corner of Market Street and Middle Sound Loop Road.

The proliferation of grocery stores coming to the Wilmington area is no suprise to those who have been involved in their development.

Steve Mitchell, a commerical broker with Coldwell Banker Sun Coast Partners, worked in the grocery industry for 30 years - 20 of those with Kroger - before entering a real estate career.

"Any time you're in expansion mode from a chain standpoint, it is more cost effective to fill out a metro area [such as Raleigh or Charlotte] and then branch out into smaller cities from logistics management, just getting from store to store and getting deliveries in," Mitchell said.

Stores like Aldi and Lidl, both of which are planning multiple Wilmington locations, "market to a certain niche" with discount or differing items for sale than stores already here.

Sometimes stores face opposition from neighbors. Some residents near a site on South College Road where an Aldi has been proposed attended Tuesday night's Wilmington City Council meeting to protest the project. At the meeting, the council voted to approve a rezoning that allows the project to move forward.

"Wilmington's just like any other city. People like choices, and they like new places to shop. They just don't like them in their backyard," Mitchell said, not referring to any specific grocery store proposals.