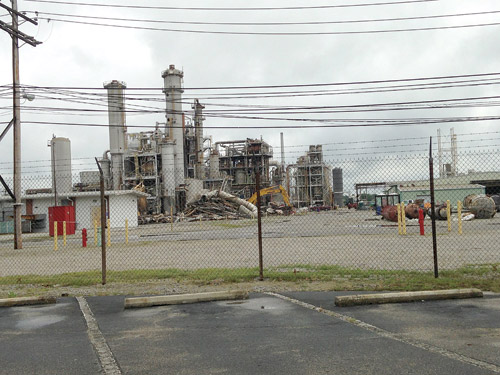 A company that's part of manufacturer Invista, which has been dismantling part of its Wilmington plant, sold 25 acres of undeveloped industrial land on U.S. 421 recently. (Photo by Cece Nunn)
Like other sectors of the Wilmington area’s economy, commercial real estate activity shows signs of continuing improvement after the first quarter of 2015, local brokers say.

“I’ve been busier than I’ve been in years,” said Will Leonard, vice president of brokerage at Cape Fear Commercial. “I think it’s picked up by leaps and bounds since the same time last year, maybe even two quarters ago.”

But he said there’s a specific sector he’s most excited about.

“We’re actually doing some industrial land deals,” Leonard said. “There’s been very, very few of them in the past several years.”

In one of those deals that closed in April, a company bought 25 acres along U.S. 421 North that could allow for the expansion of the I-140 Business Center.

Seamist Properties LLC purchased the land for $740,500 on April 17, according to a deed filed in New Hanover County, from a limited liability corporation associated with Invista, a synthetic polymer and fiber manufacturer that used to make more of its products in a plant on U.S. 421. The property is a portion of what was a much larger tract owned by Invista, more than 1,000 acres, at 4301 U.S. 421 N., according to county tax records.

A spokesman for the I-140 Business Center, located in the 3800 block of U.S. 421 North, said the purchase of the 25 acres was made in anticipation of future expansion at the center, which offers industrial flex space and where land was expected to be cleared soon to add 60,000 square feet of space.

“I think the industrial market is picking up,” said P.J. Doherty, a broker with Carolina Commercial Investment Properties. But some of the larger spaces available, 35,000 square feet or more, are sitting vacant, he said, while a “sweet spot” exists in demand for properties with 6,000 to 15,000 square feet. Those that are 5,000 square feet and smaller are either already taken or don’t have what the potential tenant needs in some cases, such as laydown yards and 12- to 15-foot eves, Doherty said.

Leonard had a similar assessment. “Spaces with loading docks and outdoor laydown yards are at a premium. There just aren’t many out there,” he said.

No new industrial space was completed locally in the first quarter of 2015, according to an industrial report from CoStar Group Inc., a company that maintains a database of commercial properties.

“The problem we have right now is in development. You can’t build and borrow and lease out at these rates – $6 or $7 [per square foot],” said Garry Silivanch of Eastern Carolinas Commercial Real Estate, referring to a shortage of flex space that meets specific needs. “You need to be at the $10 rate at least.”

The industrial vacancy rate in the Wilmington market area, defined in the CoStar report as including parts of Pender and Brunswick counties, was 18.7 percent, a rate that had hovered around 18 percent throughout 2014, the report said. Flex projects reported a vacancy rate of 7.1 percent, according to CoStar’s summary.

More industrial space, and sales, could be on the way to the region. Regarding U.S. 421 as a road to potential growth in manufacturing and other industrial uses, local elected officials have embarked upon an effort to extend water and sewer along the corridor up to the Pender County line. Their intent is to make some of the last developable land in the county in an industrial zone more attractive to companies that could bring jobs to the area.

A cooperative U.S. 421 effort between the city, county and Cape Fear Public Utility is already under way.

The utility authority’s board announced April 8 that it had approved a contract for two projects that will first connect Flemington-area residents to CFPUA’s central drinking water system and then eventually allow the entire U.S. 421 corridor to connect to water and sewer.

The city’s contribution consists of providing the use of city land for construction and maintenance of the lines. Duke Energy contributed more than $3 million for the Flemington work. But the remaining construction necessary to meet economic development goals will cost about $12 million, the county estimates.

County staff members have said the county could incorporate the costs into its budget.
County estimates, based on extending water and sewer, ranged from 957,505 to more than 2.6 million square feet in new industrial space that potentially could be created by 2040 along the corridor.