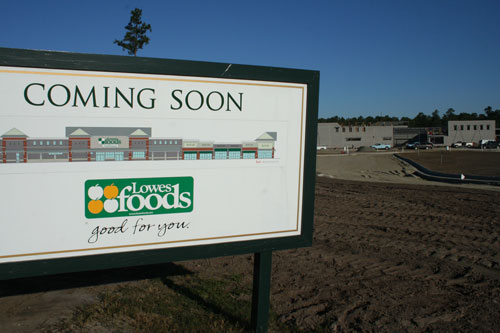 After several years of planning and waiting out the recession, construction of the first grocery store and major anchor tenant in Leland residential development, Brunswick Forest, has begun.

Builder Clancy and Theys broke ground on a 43,990-square-foot Lowes Foods Fresh Smart Store in September, said Tim McGuan, Clancy and Theys project manager. The construction cost is about $3.4 million. So far, the outer walls and structural steel have been erected on the new building in the shopping center located off Highway 17 inside the Brunswick Forest development.

“At the very beginning, we knew a grocery store was going to be very important,” said Alan Kerry, president and COO of Lord Baltimore Properties, the Brunswick Forest developer. “We took a look at our demographics of people coming into Brunswick Forest. Lowes came to the top. They are really popular in the area.”

An additional 7,500-square-foot retail space is being built next to the grocery store, which is budgeted at $500,000, McGuan said. There is room for about five to seven retailers to lease that space.

The plan is for construction to be complete by mid-February and the store to open by the end of April, said Roger Henderson, vice president of real estate for Lowes Foods.

In 2007, Lowes Foods executives and Brunswick Forest developers entered an agreement to develop the Winston-Salem-based grocery chain in Leland, Henderson said. Lowes Foods currently has three stores in Brunswick County in Shallotte, Southport and Ocean Isle Beach. Next year, it plans to build another store near the Oak Island Bridge on Southport-Supply Road.

“The thought was [the Leland store] would be a 2009 project. But, as the economy did its thing, both parties decided to postpone the work,” Henderson said.

An uptick in residential sales this year signaled the developers to begin building.

Closed sales in 2010 totaled 141 units and $40.5 million. But, so far this year, the number of closed and contracted sales in Brunswick Forest has reached a peak in the development’s four-year history of units sold with 145 unit sales at $35.7 million.

About 780 families live in Brunswick Forest.

“We knew it would be years for Brunswick Forest alone to be enough to support an entire store,” Henderson said. It takes about 8,000 families to support one store depending on what is already available in the area, he said.

In Leland, there currently are a Harris Teeter, two Food Lions, a Piggly Wiggly and a Walmart Supercenter. According to the latest census data, the town of Leland has a population of 13,527 and 6,583 housing units.

But, including the households surrounding Leland, Lowes Foods determined the larger trade area population was enough to support the new store, Henderson said.

The new shopping center’s retail space is a mixture of owned and leased properties. Lowes Foods will lease the new building.