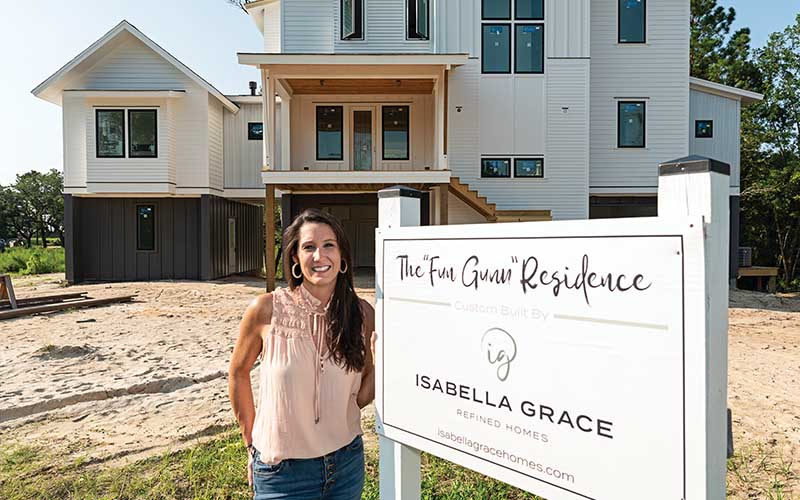 Annah Norris started Isabella Grace Refined Homes, a custom homebuilding business, with the aim of completing four to five houses a year. (Photo by Michael Cline Spencer)
As a child in the Western North Carolina town of Black Mountain, Annah Norris didn’t really have a place to call home.

“Growing up, we had it kind of rough,” the Wilmington homebuilder said. “We moved around a ton and never really had a settled place. So homes are a big deal for me.”

Over the years, she’s made building homes for others her life’s work. Af­ter working for more than a decade for Bill Clark Homes, Norris created her custom homebuilding business Isabella Grace Refined Homes at the end of 2018.

“Even though I loved my job and I loved everything I did at work, I just had to take a different direction, and so I decided I would go out on my own,” she said.

The title she had the longest at Bill Clark Homes, a company that builds homes in Wilmington, Greenville and New Bern, was sales and marketing manager. While there, she started Legacy Homes by Bill Clark, a more custom brand under the Clark ban­ner.

“They were so good to me and helpful in training me on all aspects of the job that I was able to learn not just the sales or the management or the marketing side, but also plan­ning, design, material selection and just being involved in the day-to-day construction side of it,” Norris said. “I learned that over time with the Clarks.”

Starting her own company, she decided she would focus on four to five homes a year after an initial pe­riod of working on just renovations because of a noncompete agreement in place until the end of 2019.

The small number of projects allows her to be a part of the whole process, while still having flexibility for her children, who are 11 and 8, she said.

“I like the sales, the marketing, the selections, the construction, the day-to-day project management. All that’s fun for me. I couldn’t keep my hands on all of it when you’re doing 120 houses a year,” Norris said. “I wanted to step back and be part of the whole thing.”

Her first custom job is a 3,400-square-foot home in the An­chors Bend neighborhood in Wilm­ington for residents Beau and Ann Gunn.

Beau Gunn said he and Ann met with other homebuilders but chose Norris for numerous reasons, including the fact that they found the story of how she worked her way up in a male-dominated field compelling. They also “felt she would be someone that was going to help us really bring our dream home together, not just build it, but to truly bring it together.”

He said her company has a boutique feel, and she’s been involved in each step of a process that is expected to be complete in a couple months.

“I have got to believe that she brings a level of attention to detail and organization that keeps a project moving that others may not possess,” Beau Gunn said.

Norris graduated from Wake Forest University in 2001 with a degree in English before teaching high school students for three years. She met her first homebuilder employer when she was still teaching high school and designing her own townhouse in Greensboro. She moved to Ocean Isle in 2005 and began working for Bill Clark Homes a year or so after that.

“It’s been hard since I left [Bill Clark Homes] because starting your own business is stressful, but I think I’ve made it through the really rough patch, and we’re starting to see some light at the end of the tunnel,” Norris said.

Norris is introspective about her job as a homebuilder and writes about it on a blog on her Isabella Grace Refined Homes website. In one blog post from 2019, she chose to write about the concept of restoration.

“As a business owner and a single mom, I often get tired and overwhelmed, and forget to open my eyes to the beautiful picture of humanity that surrounds me: Creation – Brokenness – Restoration,” Norris wrote. “What an amazing privilege it is to be an active participant in the joy of restoration. I get to take something that is broken and make it whole, all the while understanding that ruin is part of the process. After the year that Wilmington had last year [2018] through the storm [Hurricane Florence], I know that I am not the only one.”

Isabelle Grace Refined Homes is also a way for Norris to give back, she said.

The inspiration for starting the business came from asking herself what she would want to do if she could do anything, and her answer was to help others have comfortable homes, Norris said. As a result, for every home she works on, a portion of the proceeds will go to a fund for fixing the homes of other single moms in Wilmington who need the help, “whether it be painting and cleaning, new living room furniture or redoing a bathroom or fixing up the kitchen – whatever it is she needs the most,” Norris said.

Norris describes why on her website, saying, “Most of us have worked hard to achieve the position in life that has afforded us a good home. But, unfortunately there are many in our city who do not experience the basic physical and emotional comforts that a home provides. We believe that a home should be a refuge – and we intend to help. Our mission is to help local families in need create safe and lovely homes of their own.”

Elaborating on why the concept of home is so important to her, Norris said, “People work so hard for this. This is the biggest purchase they make, and it affects everything about their life, their family and everything.”