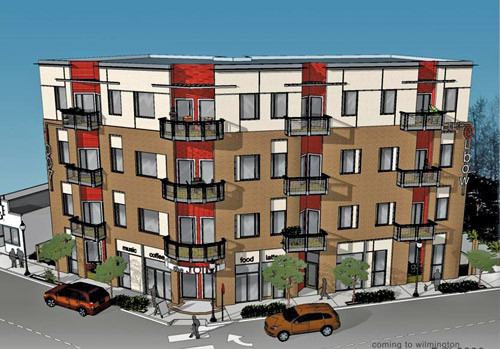 Downtown Wilmington’s residential real estate market got a shot in the arm when PPD moved its headquarters to the city’s north end in 2007. Things have cooled in the residential market over the past year, but developers are hoping the north end is ready for The Elbow.

Randy Harmon and Bill Gilligan, business partners in Capstone Development, started acquiring land and investing in the north section of Wilmington before PPD opened its headquarters downtown. Initially the two had owned several units in buildings developed by Dave Spetrino and Plantation Building.

The pair is following the lead set by Plantation Building, Harmon said. Ideally, Harmon said, Capstone has plans for a four-phase development, which will include 177 units and incorporate 250,000 square feet of space in the Brooklyn Arts District.

Designed by Michael Ross Kersting Architecture, The Elbow, which features 14 residential units, started pre-selling in December and has occupancy scheduled for late-winter 2010.

The development is benefiting from its proximity to the pharmaceutical company. Two of the pre-sales are PPD employees and others resulted, Harmon said, from PPD and its commitment to the area. The project is about 70 percent pre-sold. Prior to going into real estate, Harmon was a computer engineer for more than 8 years for PPD.

Ron Satterfield, planning manager in development services for the City of Wilmington, said the effect of having PPD open downtown has been a positive one and the additional residential units have been welcome.

The attraction, Satterfield said, is that “the residential market was already there for downtown.” But developers also were motivated to build more residential because of the PPD headquarters.

He sees other areas available as well, including in-fill historic downtown and north of Red Cross, where vacant land exists for horizontal and mixed-use development.

While North Fourth seems to be a vibrant and growing community, Harmon said some locals won’t necessarily transition to the North Fourth area. But he sees many
businesses and residents who will.

“PPD adds benefits to the area,” Harmon said. He commented on the success of restaurants in the area, namely Big Thai, which Harmon said has had success in its North Fourth Street location for nearly 3 years.

Harmon noted that the developers in the North Fourth area tend to complement each other.

“Dave [Spetrino] is the trailblazer and he set the mark. We can’t compete with him.” But Harmon is learning from Plantation Building and other developers in the area. For example, Harmon is at a different price point than other residential developers, planning to build condominiums priced from $159,000 with the highest under $300,000.

The commercial, residential and institutional development is a “shot in the arm for downtown Wilmington and the region in general,” he said. “It is positive for the region. Everyone will feel the economic impact.”

Dave Spetrino Jr., president of Plantation Building, has also been at the forefront of residential development in the downtown and North Fourth Street area, such as The Weldon and Modern Baking Co.

He has seen a “large increase in renters” since PPD opened its headquarters.

“PPD employees are opting to rent downtown,” Spetrino said. Often he sees them walking to work and coming home at lunch and taking an hour lunch at home to walk their dogs or run errands.

Living downtown, according to Spetrino, appeals to a younger set of residents making a lifestyle decision, perhaps because they are without kids and appreciate living within walking distance to entertainment and restaurants.

Spetrino has a sense that if this younger demographic had higher salaries, they would be buying more property. He hasn’t seen an “overwhelming demand for condo product.” However, he said, new employees may start locating downtown.

Spetrino said that by virtue of PPD being downtown, the area is transitioning and is going to “evolve into a vibrant and synergized area. That is coming, no matter what.
They did that with the investment that they made.”