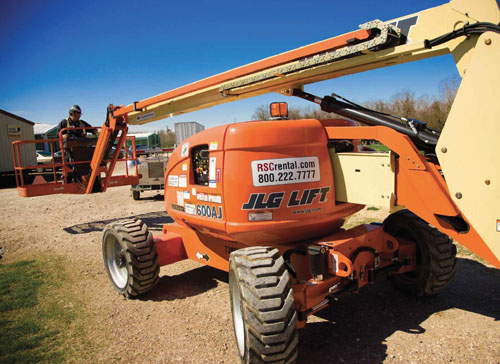 A decades-old equipment rental company has merged with a national rental company, thus closing its downtown site and leaving a prime piece of commercial property in the balance.

RSC Equipment Rentals, formally at 1020 N. Front St. near Harnett Street, has merged with United Rentals – one of the largest rental companies in the country – at its Wilmington branch, 5919 Market St.

Sonny Blackburn, senior coordinator with United Rental, said Monday that officials are still in the process of dismantling the downtown store and bringing all of the firm’s equipment to its new office.

Blackburn said United Rentals purchased RSC Equipment Rentals six months ago. He said United Rental officials are currently rebranding its Market Street location, adding that the former store location should be cleared out by the end of the week.

It’s unclear whether the owner, which according to New Hanover County tax records belongs to Houston-based Movies One LLC, is going to sell the 1.29-acre parcel.

Officials with Movies One could not be reached for comment Monday afternoon.

RSC Equipment’s move and merger now leaves the prime commercial parcel up for grabs as the northern half of downtown Wilmington continues to morph.

With the PPD headquarters as the area’s mainstay, work continues on the Northern Riverfront Hotel and Marina project. The former Sawmill Marina site, which sits across the street from the former equipment rental business, was recently sold to Charlotte-based Sawmill Point Investors LLC for $3.6 million.