Mainstay Off The Main Drag 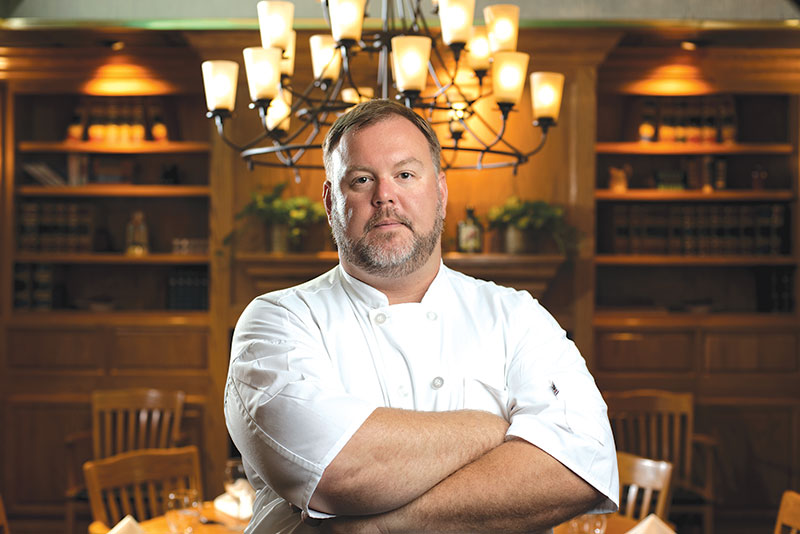 The restaurant world can be a trendy, Johnny-come-lately space where the ill-prepared and overly-eager often find themselves shuttering shortly after grandly opening. There’s always a new kid on the block looking to knock off a reigning champion.

But for the Port City Chop House, 1981 Eastwood Road, quality and consistency have kept the lights on, the grills hot and the booths full for decades.

“Surprisingly, a lot of the core menu has stayed the same,” said corporate chef Matt Kahrs, an 18-year veteran of the Chop House. “Some of the sides have been the same since Day One, some of the cuts of beef have been the same since Day One. We serve certified Angus beef, center-cut steaks. Being a steakhouse, a lot of people want that meat and then choice of a side item.”

But, perhaps even more than the culinary offerings, Port City Chop House’s attention to providing guests with a higher-end dining experience has resulted in the restaurant’s longevity.

Whether a corporate holiday gathering or just a weeknight dinner, its spot at the top of Wilmington’s steakhouse ladder has gone relatively unchallenged through the years.

“At one point, directly across the street from us, we had Vinnie’s Steakhouse that would have been direct competition, but they didn’t last,” Kahrs said.

“There was another place in Lumina Station, where 1900 is now. They were open for a while, and it didn’t last. Other than Ruth’s Chris [Steak House at Hotel Ballast], anyone who has tried to be direct competition has not been able to take our business. People may go try it out, but then they come back. We hear that we are more consistent.”

While some people dine out only infrequently, the Eastwood Road staple near Wrightsville Beach has a firm base of regular guests.

“We have people who come to the bar or come to eat a salad in the afternoon who we see, literally, five days a week,” Kahrs said. “These people are hardcore followers of Port City Chop House. For years, they’ve been doing it. Some of them will order the same thing every single time.”

But it isn’t just guests who return to Port City Chop House. Kahrs attributes the restaurant’s consistency in personnel as a major contributor to making patrons want to visit time and time again.

“I’ve had employees over the years that have lasted five, 10 or even 15 years for a couple of them,” he said. “In this industry, that is not that normal. I think that people get in here, enjoy our kitchen environment, who we serve and what we serve, and they stick around. It amazes me how long a lot of them stay.”

Of course, the restaurant business does lend itself to a typically more-transient workforce, but Kahrs has seen many of his employees move on to greener pastures.

“A lot of people I do lose, I lose to better positions in other restaurants,” he said. “With that, I don’t feel that bad. When someone is leaving here to go into management or to run another restaurant, I’m proud of them more than anything else.”

CORPORATE OR NOT, STILL A CHEF

Kahrs himself has worked for the Chop House company for more than 18 years. After attending The Culinary Institute of America in New York, he spent two years working in Boston before he returned to his native Greensboro and began working at the Gate City Chop House. Two years later, he moved to the Wilmington location, where he has stayed for 16 years.

“We change menus twice a year,” Kahrs said. “I’m in charge of developing new recipes, getting new products, a lot of recipe testing, menu testing – that kind of thing – and getting ready for the change twice a year.

And, of course, as corporate chef Kahrs often has to focus his attention on profitability.

“Beef costs and seafood costs from 2000 or 2001 until today have increased tremendously – doubled or tripled, if not more, on some of our center-of-the-plate proteins,” Kahrs said. “There’s only so much we can raise the menu prices, so we get creative with alternate menu items. Maybe using less-used cuts of meat that still have great flavor and are tender – everything you’re looking for – just not something that the public is completely familiar with. So, you can get a little creative with how you prepare it and make a little more money on those items to balance out the higher-priced steaks.”

But despite the responsibilities of his corporate role, Kahrs, like many executive-level chefs, still draws happiness from preparing and serving food.

“I’m on the line every day, expediting, working one of the stations like grill or sauté,” he said. “I just enjoy making people happy, so if I can send food out that fills their belly and puts a smile on their face, that’s what makes me happy.” RESTAURANT ROUNDUP

Anniversaries: Making of a milestone