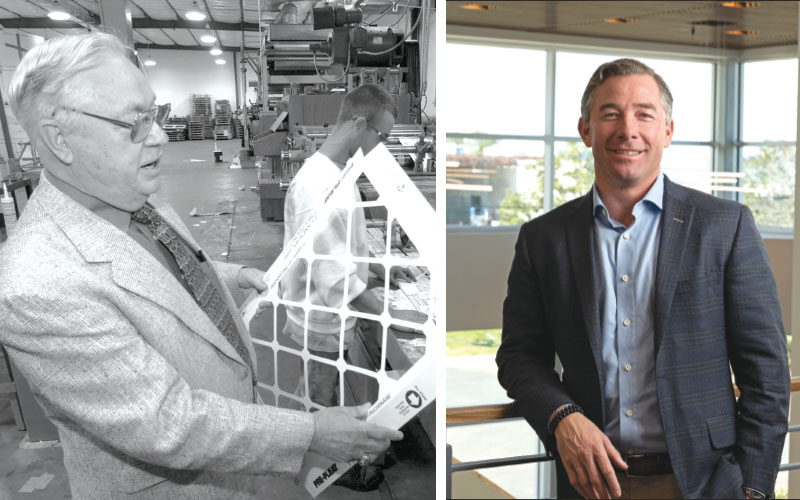 Horace Carter (left), looks over one of Atlantic’s products at its Tabor City warehouse. (Photo c/o Atlantic Packaging) Wes Carter, president of the firm, stands inside the company’s new addition to its ILM headquarters. (Photo by Michael Cline Spencer)
Atlantic Packaging is putting the final touches on its newly expanded headquarters and opening a new location this month.

The moves are just some of what company leaders have in store for the firm, which has grown from its humble beginnings as a small-town newspaper to a national, multi-generational family-run business.

But as the firm grows, it’s also transitioning, as Altantic’s CEO Rusty Carter readies the company for the next generation.

“Their experience levels vary, but their desire to learn and their passion to carry on their grandfather’s and father’s work is very exciting, certainly as my imprint on Atlantic wanes,” Rusty Carter said.

Wes Carter, who is the eldest, has been with the company for 19 years.

“The story of Atlantic is a true American success story in every way,” said Wes Carter, reflecting on the history of the nearly 75-yearold business run by his father and grandfather before him. “It’s almost an impossible story. From a little newspaper in Columbus County to today. We are the largest privately held packaging company in our space in North America.”

Horace Carter, Rusty Carter’s father and Wes Carter’s grandfather, grew up in rural North Carolina and worked his way through journalism school, writing for the University of North Carolina at Chapel Hill’s The Daily Tar Heel. After a short stint in the Navy, Horace Carter moved to Columbus County and built a reputable weekly newspaper called The Tabor City Tribune in 1946. He was also active in the business community.

Horace Carter used his newspaper to battle against local activities of the Ku Klux Klan, an effort that won the paper a Pulitzer Prize for meritorious public service in the 1950s, the first for a weekly newspaper.

“That was really the beginnings of Atlantic, was his campaign against the Klan. And when he won the Pulitzer Prize at the age of 32, he got a lot of notoriety,” Wes Carter said.

The company later branched into the converted paperboard business, making things such as collar strips and shirt boards for the textile industry.

“In those days if you were in the newspaper business, you were also in the paper supply business. It went hand-in-hand, especially in small towns (… and) our packaging program grew from there,” he said.

Rusty Carter took the packaging business beyond the textile industry, after joining the company in the 1970s. Horace Carter still ran the newspaper until his death in 2009. The paper continues today as the Tabor-Loris Tribune.

“My dad really continued to expand what we were doing in packaging. My dad also realized pretty quickly that we could not be one-dimensional in the textile industry; it was leaving the Southeast and headed offshore as fast as it showed up. So, my dad made a strategic decision that we needed to diversify,” Wes Carter said.

In expanding the packaging business, Rusty Carter acquired another packaging firm in Wilmington and moved the packaging base to Wilmington in the 1980s. He would later adopt the Atlantic Packaging name the company is known for today, Wes Carter said.

In the next decade, the company acquired Henley Paper Co. of Greensboro in 1999, which further extend its regional footprint.

“We’ve grown our business in a lot of industry verticals over the last 30 or 40 years. We still do a tremendous amount in food and beverage; that’s probably our No. 1,” Wes Carter said, adding that the company also works with major consumer products companies in the general industrial, automotive, pharmaceutical/medical device, building products, air filtration and e-commerce segments.

The company has added capabilities in manufacturing while growing its packaging business as a very “technical packaging company,” Wes Carter said.

In 2017, Atlantic built a $10 million packaging solution center in Charlotte, with a focus on package testing, automation and e-commerce fulfillment.

The company, which has locations across the nation and offshore facilities, is opening another facility in Reno, Nevada, this month.

The company also this month plans to fully occupy the new 17,300-square-foot addition to its Wilmington headquarters off North 23rd Street.

More growth is on the way.

“With much support Wes today is leading Atlantic to parts unknown only a few years ago,” Rusty Carter said.

Wes Carter said he is honored to add to the business’s rich history.

“I take it very seriously. I feel a heck of a responsibility to carry on the incredible legacy of my father and grandfather,” Wes Carter said, adding that his father is still very engaged in the business and together they are working on guiding company growth while maintaining the family culture that has defined Atlantic.

“In today’s business world, successful private companies are the prime targets for private equity acquirers. The calls never stop. Many family companies who are challenged by the transition and tempted by the dollars take the money and run. I understand when that happens,” Rusty Carter said. “That day may come for this family, but today, under this next group of Carters I feel we will rise to even higher levels and keep being the Atlantic we have nurtured top to bottom.”