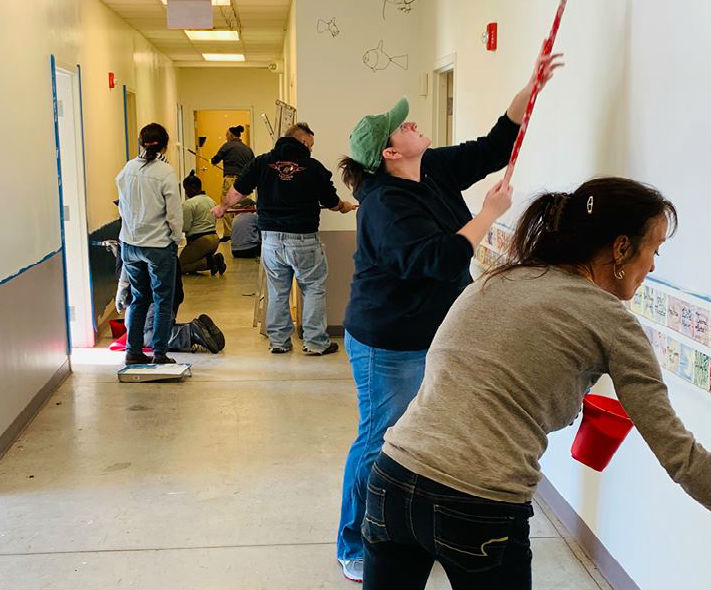 Volunteers with the Wilmington Convention Center painted walls to help DREAMS with its transition back to its building. (Photo courtesy of DREAMS)
DREAMS Center for Arts Education is ready to reopen its doors to students in February after its building sustained damage during Hurricane Florence.

In the aftermath of the storm, the DREAMS center at 901 Fanning St. had intensive water damage on its roof, walls and floors, said Kevin Blackburn, executive director at DREAMS.

The organization provides free classes in literary, visual and performing arts to children and adolescents in need. The goal of the program is to nurture creative and committed citizens. The program also exposes students to the real-world through its Youth Entrepreneurship Program, it hosts visiting artists and provides research-based curricula.

The building closed in October after water damage and mold was found. Alternate class spaces for the 125 students it usually serves at its center were set up at Grace United Methodist Church in Wilmington.

Because the city of Wilmington owns the building, it has overseen most of the building repairs, including costs, Blackburn said. DREAMS rents the building for little charge.

“We do not know the costs to the city, but we have lost over $100,000 worth of contents and anticipate that by the time we have restored our building to an inhabitable condition, we will have paid several thousand dollars to staff for cleaning and painting,” Blackburn said.

The organization also had to spend money on supplies, rent an air scrubber, as well as hire remediation specialists to consult about proper artwork and art material cleaning, he said.

“We have seen a great deal of support from the community but will need as much help as we can get moving forward, as we work to restock our studios and classrooms with needed art supplies,” Blackburn said.

The center has filed a claim with the Federal Emergency Management Agency for the destroyed contents but has yet to hear back from the agency.

“We have contacted our state liaison to FEMA several times and she has assured us that we are in line and will be contacted,” he said. “Since we submitted that claim several months ago, we have discovered a significant amount of additional damage that we did not know of at that time. We have also lost all potential income from our venue rental space, The Garage, since September.”

Despite some loses, the center has gained community help including the free temporary space from Grace United, painting supplies donations by community members and the Wilmington Convention Center sent volunteers this month to help with painting the building.

After its transition back to its building, Blackburn is looking forward to its Learning Kitchen project, a new culinary arts program for the organization. The project received $30,000 from the Landfall Foundation to carry out the project’s first phase, including the construction of a kitchen and catering facility.

He is also looking forward to the spring’s DREAMS Showcase which features art made by students throughout the semester.

“We’re so excited to share with our DREAMS families and the community all the wonderful performances and artwork our DREAMers will have created this school year,” Blackburn said. “We’re excited to fill the building back up with student art.”