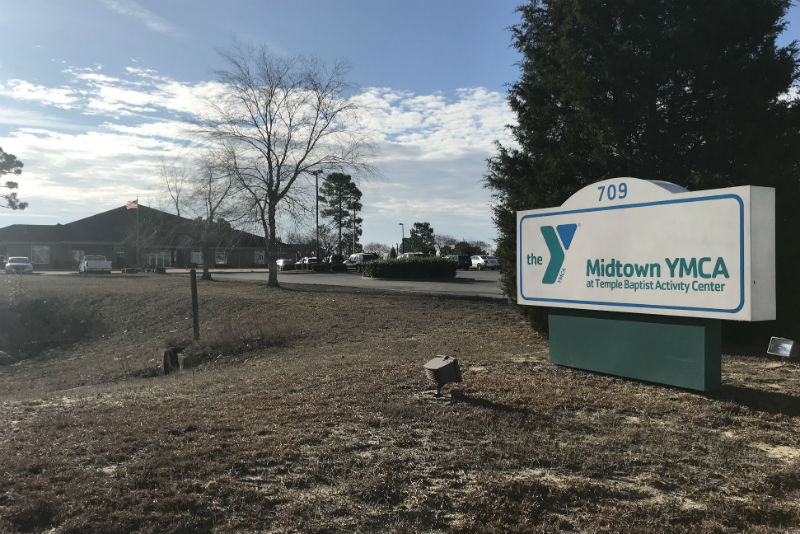 YMCA of Southeastern North Carolina officials are taking an initial step toward adding facilities, including a pool and wellness center, at the organization's Midtown YMCA on South 17th Street. (Photo by Cece Nunn)
The area's YMCA is taking preliminary steps to plan for a pool and other facilities at its midtown location in Wilmington.

YMCA of Southeastern North Carolina is seeking a rezoning of 10 acres where the Midtown YMCA facility is located, at the Temple Baptist Activity Center at 709 George Anderson Drive off South 17th Street, which the organization leases from Temple Baptist Church.

The property's current zoning designation is multi-family, but for the organization's future plans to be allowed, officials would need it to be zoned O&I, Office & Institutional, said Dick Jones, president and CEO of the YMCA of Southeastern North Carolina. Those plans include a potentially 21,600-square-foot aquatics building, where a pool could be located (though whether it would be an outdoor or indoor pool would be a factor determined later), a nearly 5,000-square-foot wellness center, additional parking, playgrounds, locker rooms and a storage building.

"As we begin to think about what we're doing where, and what we want to be here, we wanted to make sure we have a little bit more flexibility than what the current zoning designation gives to us, so we're starting that process," Jones said.

The request is expected to be on the Wilmington Planning Commission's agenda in March, after which the City Council could consider it at a later meeting. The Midtown YMCA opened the branch at the property, which has a special use permit because it was previously home to Coastal Christian High School, in March of last year.

Jones explained that while these new facilities are the YMCA of Southeastern North Carolina's vision for the property, there's still a lot to do before they could be made a reality, including raising money to fund the project.

"We have to submit a vision of what might be here at some point in the future as part of this process," Jones said of the city's requirements for the rezoning request.

The local Y is in the midst of a campaign to raise $7 million for the overhaul of its main facility at 2710 Market St., which was badly damaged by a fire in February 2015.

The YMCA of Southeastern North Carolina received a $2 million gift last year from Oaz Nir, the son of longtime YMCA Healthy Living Director Dalia Nir. When it re-opens, the facility will be renamed the Nir Family YMCA.

Jones said he hopes that re-opening can occur by the end of this year. At that point, YMCA officials can focus on the steps they need to take to create the additional midtown facilities.

"We want to complete one project and then start another. We don't want to do two or three at the same time," he said.

Midtown Wilmington is a part of town where "we've been talking about developing a presence for a number of years, and when this opportunity [to lease the Temple Baptist facility] presented itself, it was really an ideal partnership and location. We wanted to be right next to The Pointe at Barclay," said Jones, referring to the movie theater-anchored entertainment and dining complex at 17th Street and Independence Boulevard.

He said a midtown presence "really opens up an opportunity for folks to benefit from the services of the Y and the programs we offer in the southern part of the community."