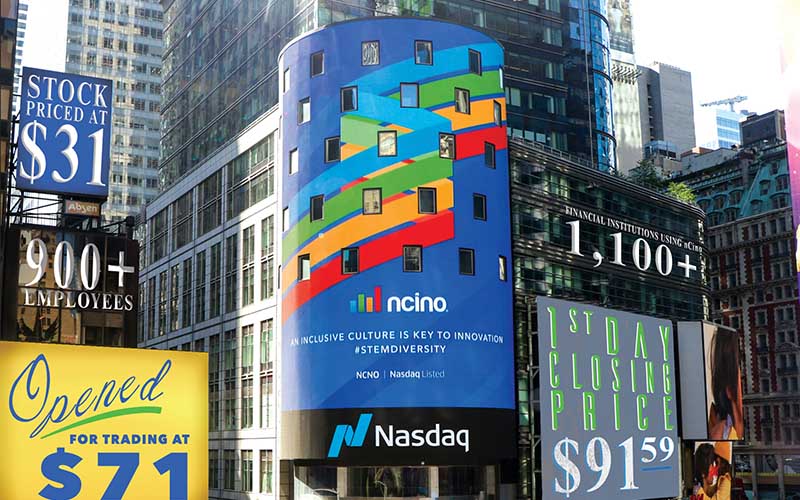 Wilmington-based banking software company nCino’s Nasdaq debut in July was marked by images on the middle screen above in Times Square. Other company benchmarks and IPO highlights are added in this photo illustration.
When Live Oak executives let nCino leave the nest, could they have known it would skyrocket to such fame and fortune?

“It did not surprise me at all,” said Live Oak Chairman and CEO James “Chip” Mahan soon after nCino’s July 14 IPO on the Nasdaq, during which the stock price soared from $31 to over $90 per share. About 7.8 million shares changed hands during the first day of trading.

When the dust cleared that day, 9-year-old nCino, which had $138 million in revenue in its most recent fiscal year, was valued at close to $7 billion. Its stock price has stabilized since then at about $75 per share.

Not only did Mahan compare nCino’s showing very favorably against those of comparable software-as-a-service entities; the company’s IPO performance also drew much attention from market watchers and investors. Jim Cramer, co-founder of TheStreet, said as of late July that only four cloud stocks had valuations higher than post-IPO nCino. One of those four is Zoom.

“nCino sits at the sweet spot of fintech and cloud software, helping banks large and small with digital services from loan origination and approvals to compliance,” Cramer noted July 23. “The company has been on fire lately, posting 49% revenue growth in its most recent quarter.”

Cramer and some analysts have questioned nCino’s current “lofty” valuation, especially since the company has yet to turn a profit, and the current economic climate is troubled. But nCino CEO Pierre Naudé said in a post-IPO interview with American Banker that the pandemic will not slow the company’s efforts to become profitable in the next six to eight quarters.

And some other analysts agree that nCino is likely to maintain its valuation.

“With the surge in the stock since the IPO, nCino appears to be one of the most highly valued names in the Software as a Service (SaaS) space,” Peter Heckmann, managing director for equity research at D.A. Davidson & Co., wrote in a recent email. “At the $31 IPO level, nCino was valued at roughly 14 times forward revenue, which wasn’t too far off from the valuations of some other small-/mid cap software names like competitor Q2 Holdings (QTWO) (trading at 14x 2020 revenue) or APPF (~16x).”

A per-share price of $76, which is about where shares are trading at present, “seems to represent an enterprise value of over 30 times our forecast for 2021 total revenue,” Heckmann added.  “As long as the company can report strong growth in new bookings over the next two quarters and the market remains confident in forecasts for strong revenue growth in calendar 2021, we suspect the company can hold this valuation. Overall, we don’t see many signs that the market’s enthusiasm for the Software as a Service (SaaS) space is waning.”

When Live Oak Bank – founded in 2007 – got a few years’ experience under its belt as an industry-specific SBA lender, its founders realized they needed an electronic software system that would improve the efficiency and ensure the accuracy of their nationwide lending process. Finding nothing on the market that effectively addressed their needs, they created their own system, using the Force.com platform of Salesforce.com and drawing on their own experience in internet banking.

“We began writing code in 2010,” Mahan said recently. “Neil [Underwood, now Live Oak Bancshares president] and his brother Pete picked the force.com platform because we had a challenge. We had 158 documents per loan and we needed to get all the data in one place, to treat every customer like the only customer in the bank and enable our lenders, our underwriters, our closers and our services to do the best job of any bank in the land.”

The resulting Bank Operating System did the job, and it occurred to Mahan and Underwood that the system could be helpful to other financial institutions as well. In late 2011, they created a separate software unit, raised about $3.5 million to fund it and recruited Naudé from his position as a divisional president at Atlanta-based S1 Corp. to lead it.

Named nCino, a riff on “encino,” the Spanish word for live oak, the fledgling operation took shape hunkered down in office space near that of its parent in the Iron Gate Office Park. Naudé’s job, as described by Mahan, was to take the code developed by Live Oak Bank and “make it elegant for use by us and other banks.”

“Our target market is the traditional community banking market: banks and credit unions with assets between $1 billion and $10 billion,” Naudé said in mid-2012. “This is a market size of roughly 1,500 banks and credit unions in the United States. We are evaluating a strategy to make this software available to large financial institutions as well.”

Six months into its existence, nCino boasted six clients and had several others in the pipeline. Its marketing approach combined direct sales and channel partnerships, Naudé said at the time.

“The nCino system is built upon the Salesforce.com platform; we have developed a strong partnership with Salesforce.com that has led to further sales and marketing opportunities,” he said. “This has coincided with the growth of our sales team and our marketing efforts, which will involve targeted banking conferences, establishing our image as the inventor of cloud banking, and creating case studies on how our existing bank clients have benefited and prospered with the nCino system.”

With a $9 million “friends and family” capital raise in early 2013, nCino accelerated its growth, logging 25 customers by late that year and attracting a further $10 million investment by Wellington Management.

While it was still not profitable, nCino’s steady growth continued to impress the business community. Forbes chose nCino as one of “America’s 2015 most promising companies” and, in February 2015, the software company announced the successful completion of a Series B financing round totaling $29 million.

nCino’s leadership team decided that while their cloud-based lending software was gaining acceptance among a broad range of financial institutions, it needed to do more. So in 2016, nCino expanded the software to streamline deposit account opening and also introduced an auto-decision loan function. Two years later, the Bank Operating System grew to cover retail banking operations.

It’s called “land and expand”: in other words, sell your signature product to customers and make yourself indispensible to them with complementary products.

“[nCino’s] thesis has always been to create a bank operating system, land and expand first its loan origination, [then] deposit account opening, compliance and risk management, artificial intelligence,” Mahan said in July. “This is incredibly sticky software and as you move across the enterprise from the wholesale side of the bank to the retail side of the bank, you can see why this company has become so interesting.”

From start to finish, 2017 was a milestone year for the company. Barely five years into its existence, nCino had a customer list of about 130 financial institutions and employed 265 people. In January, SunTrust Bank, with assets of $205 billion, adopted the Bank Operating System, becoming nCino’s largest client. Two other big clients – Regions Bank ($125 billion) and Bank of the West ($74 billion) – were evidence that larger banks were seeing the benefits of a cloud-based, integrated software system.

At the same time, Naudé and his team were scouting opportunities on the other side of the Atlantic, and in mid-2017, the London-based OakNorth Bank became nCino’s first customer outside the U.S. nCino also opened an office in London to pursue sales in the U.K. and beyond.

“We will be supporting the European market from our London-based office and have already seen intense interest from European financial institutions for nCino’s Bank Operating System and the value it can provide,” Pullen Daniel, nCino’s managing director for Europe, said in July of that year.

Since then, nCino has established offices in Sydney, Toronto and, last fall, in Tokyo. At about the same time, it completed an $80 million capital raise, bringing the total investments between 2014 and late 2019 to about $205 million.

“We believe the next phase will be all about the intelligent enterprise,” Naudé said last year. “Every stage of every product will be enhanced through AI [artificial intelligence], machine learning, robotics and analytics. Banking is going from product-based to relationship-based.”