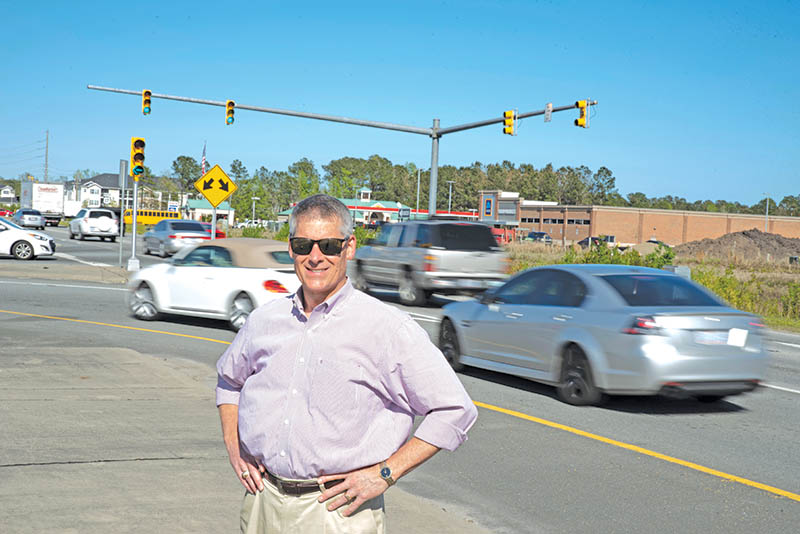 Gary Vidmar, Leland’s economic and community development director, is shown at a so-called Michigan left intersection on U.S. 17. Photo by Michael Cline Spencer
As the area continues to attract new residents and businesses, as well as bumper crops of tourists, the challenge of improving traffic flow increases.

Upgrading the street infrastructure is especially difficult in Wilmington, which is an “old town,” according to NCDOT’s Benjamin Hughes, district engineer for the department’s local District 3. Adding new thoroughfares is not easy, partly because much of New Hanover County is surrounded by water.

There are some improvements in the works, Hughes noted, citing the Military Cutoff Road extension that is designed to decrease traffic on Market Street (U.S. 17) north of Military Cutoff’s intersection with Market. But that project isn’t slated for completion for another three years, Hughes said.

Then there are improvements planned for Market Street itself that aim to increase safety and maintain a better flow of traffic. Hughes explained that this project, which will be done in phases, will install a median and limit left turns through so-called Michigan lefts along a major stretch of Market Street from about 29th Street north to Marsh Oaks Drive, near Bayshore. Medians have already been installed from that point to Porters Neck Road.

The Michigan left was developed several decades ago in that state to avoid the interlocking left-turn movements along divided highways. Traffic entering the highway but wanting to make a left turn makes an initial right turn and then moves left to a dual U-turn lane with its own traffic signal.

Replacement of the current center turn lane – often termed the “suicide lane” – with a median and controlled left-turn points will provide “a huge safety benefit,” Hughes said, explaining that this kind of street design prevents many accidents.

Work should begin soon. Hughes said the section of Market between Middle Sound Loop Road and Marsh Oaks Drive is under contract.

Perhaps the most striking traffic improvements have occurred in northern Brunswick County, where a population explosion in Leland has spurred some innovative approaches to traffic management.

One is the diverging diamond on N.C. 133 in Leland.

This roadway design, which the NCDOT is using with increasing frequency, makes two directions of traffic temporarily cross to the left side of a road while moving high volumes of traffic through an intersection without increasing the number of lanes and traffic signals. Diverging diamonds improve traffic safety by allowing free-flowing turns for vehicles entering and exiting the highway and reduce the number of traffic signal cycles that vehicles encounter.

Officials said that diverging diamonds are already in use or are in the planning or construction stages along busy highways in a number of other metropolitan areas in the state.

U.S. 17 in the Leland area has also been improved to superstreet status, meaning that opposing lanes of traffic are separated by a median and left-hand turns must be negotiated through Michigan lefts.

“Traditional intersections are not efficient,” said Hughes, explaining that superstreets prevent direct left turns from side streets but give predictable turn access to left-turning vehicles while maintaining a green light 70% of the time for the major highway.

Gary Vidmar, economic and community development director for Leland, is a fan of both the diverging diamond and the superstreet approaches to traffic management. These improvements, together with the expansion of the causeway leading up to the Cape Fear Memorial Bridge, have largely eliminated backups getting onto the bridge.

And that’s a big selling point, he said, for luring new residents and new commercial development to northern Brunswick County.

“We tell them that we are 10 minutes away from downtown Wilmington,” Vidmar said.

The U.S. 17 superstreet section was a joint effort between local developers and NCDOT, Hughes said. The area’s planned communities, such as Brunswick Forest, had to hire a traffic engineer to do traffic impact studies and to build a traffic model for the highway adjacent to the mixed-use neighborhood. That way, Hughes explained, transportation planners could see likely problems and plan needed improvements.

Improvements like these have not yet happened further north on U.S. 17 in Pender County, but they are on the drawing board, says County Planning Director Kyle Breuer. In the meantime, he said, “tremendous growth” in the coastal portion of Pender County is causing major congestion on the highway.

One traffic mitigator will be the much-anticipated eight-lane Hampstead Bypass, for which funding has been allocated. The project is scheduled to be put out for bids soon, and officials hope to have a contract in place by July of 2020, Breuer said. Once the bypass has one lane in each direction open to traffic, work will begin on improving U.S. 17 through Hampstead to superstreet status, with a median and Michigan lefts.

“That’s close to a $400 million investment in Pender County,” he added. “That’s unheard of if you look at funding per person. We certainly are looking forward to those projects to alleviate congestion along the [U.S.] 17 corridor.”

That congestion gets compounded with a lot of through traffic in morning and afternoon peak hours, Breuer said, adding that once the bypass is fully open, there will be a 60-70% reduction in the volume of traffic.

“And that takes into account growth projections for Pender County,” he said.

Pender County in 2016 adopted a collector street plan, providing roadways to connect developments. The plan, Breuer said, establishes a hierarchy standard of future roadways that tries to balance mobility with the need for access, and to provide alternatives between destinations that reduce the need for vehicles to use the major roads.

“We feel good there’s planning going on to affect the built environment for generations to come,” he said. “A lot of that planning work was not done in the past, resulting in [U.S.] 17 being the primary functioning roadway on that side of the county.

Pender County planners are also working to facilitate other forms of transportation, according to Breuer. Communities have committed to installing sidewalks along both sides of U.S. 17 once the median project is complete.

“We’re looking to work with the state to provide more options to connect neighborhoods to goods and services,” he added. “We have created a bike and pedestrian overlay district, designed to be implemented in areas where we are going to realize bike and pedestrian development. We’re about to have a multiuse path from North Topsail Elementary to Kiwanis Park. We’ve received a 42- acre donation of land that adjoins Kiwanis Park. We have lots of little projects going on.”

Planners are also trying to manage traffic growth by luring more employers and encouraging more residential development near commercial development. That would cut down commuting traffic, which is significant at present.

Breuer said 60% of Pender County residents work in other counties, which puts additional strain on the county’s roadways.

“With new job creation will eventually [come] residential development,” Breuer said. “In our comprehensive plan we support higher-density development around our Commerce Park so there’s an opportunity to live near where you work.

“Otherwise, you create more bedroom communities,” Breuer added. “We try to support employment in Pender County but understand that New Hanover County and Wilmington are the primary source of employment.”