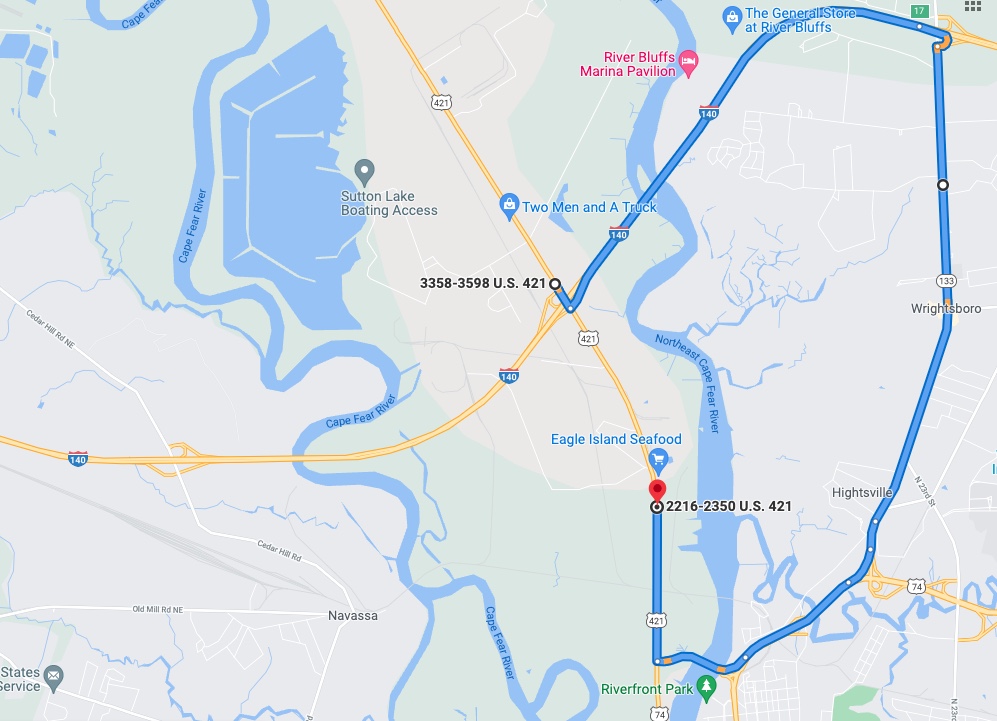 The detour means drivers headed into Wilmington will have to cross the Northeast Cape Fear River via Interstate 140 and ultimately travel back across the river via the Isabel Holmes Bridge, just north of downtown.

The N.C. Department of Transportation (NCDOT) announced that CSX will be closing the highway south of its intersection with Interstate 140, sending drivers – including the many tractor-trailer rigs that use the route – on a 10-mile detour through Wilmington.

The detour means drivers headed into Wilmington will have to cross the Northeast Cape Fear River via Interstate 140 and ultimately travel back across the river via the Isabel Holmes Bridge, just north of downtown.

According to a DOT news release issued late Thursday, a CSX contractor plans to close the highway just south of Sutton Steam Plant Road, northwest of downtown Wilmington, for maintenance and repairs to a railroad crossing.

Although most rail tracks cross roads perpendicularly, this one cuts across the busy highway diagonally, making the maintenance work more challenging.

“NCDOT and CSX officials anticipate the track maintenance will require no more than five days to complete, but the highway could be reopened in as early as three days, if the weather cooperates,” according to a news release from the Wilmington Chamber of Commerce.

The chamber became involved after learning about the closure from a member.

“As our region’s business advocate, I engaged with the NCDOT, Sen. Michael Lee and other local leaders to determine if any alternative solutions were available rather than a complete closure,” Chamber President and CEO Natalie English told the Greater Wilmington Business Journal on Friday. “Due to the curvature in the rail line and its location, it’s impossible for CSX to complete the project without a full closure.

“Ultimately, we believe our efforts will result in CSX minimizing the length of the closure period,” English said, adding that the detour will increase travel times for commuters, trucking operations and other motorists.

Because this location is between two rivers, a marked detour by CSX will send drivers on an approximately 10-mile detour via U.S. 74 (Martin Luther King Jr. Parkway), N.C. 133 and I-140 at exits 14 and 17. In order to expedite the work, NCDOT crews will assist the CSX contractor.

With business booming at the Port of Wilmington as well as in the trucking and logistics sectors, the chamber is making transportation issues a priority this year. One of its 2022 goals is to continue to work to develop its regional transportation advocacy group, helping to prioritize the transportation needs, specifically a viable plan to replace the aging Cape Fear Memorial Bridge.

Many of the motorists using U.S. 421 are truckers heading to and from the port, which, English said, contributes more than $15 billion annually to the state’s economy and supports tens of thousands of jobs.

Federal law gives rail operators broad authority to prioritize repair and maintenance work, since a service disruption in one area can have a major effect on service elsewhere.

Although not related to next week’s work, English said that the disruption points to the need for the rail realignment proposal currently being considered. The plan would mean that trains leaving the port would cross the Cape Fear River just south of downtown rather than via the current route that runs through the heart of Wilmington, primarily to reach the railroad bridge that crosses the Northeast Cape Fear River.

“We believe railroad maintenance is critical to ensure safety along rail corridors,” English said, adding that the disruption caused by the upcoming work is on scale with what motorists face in the city limits with the numerous rail crossings.

“It lengthens the commute time for employees, adds to the cost of freight transport and increases the time for emergency response,” English said. “We are encouraged that our rail partner sees that as well and will work diligently to minimize the length of this closure. We are pleased that CSX and NCDOT are working to do just that.”