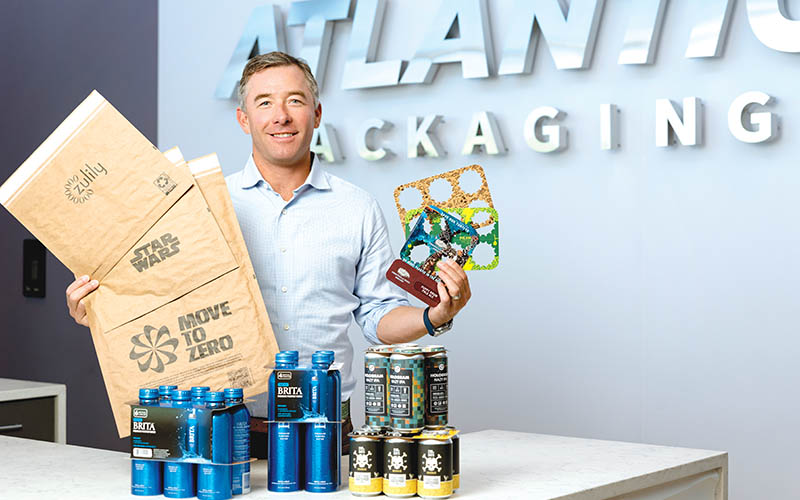 Wes Carter, president of Atlantic Packaging, is shown at the company’s headquarters in Wilmington with its sustainable products. (Photo by Michael Cline Spencer)
As an avid surfer, Wes Carter has traveled around the world surfing. Over the years during his travels, he noticed an alarming trend: The world’s oceans were getting dirtier.

“I became more and more aware that these places I’ve been going for the last 20 years were getting more and more proliferated by plastic pollution,” he said. “It would be the most beautiful places on the planet, and I was just seeing plastic everywhere.”

As the president of Wilmington- based Atlantic Packaging, he realized he was in the unique position of changing not only how his company operates, but also encouraging others to help reduce plastic waste in the ocean.

Since then, Atlantic Packaging, a packaging and equipment distributor, has adopted more sustainable and environmentally friendly practices at its facilities throughout the U.S.

“When it comes to sustainability, it’s a multi-pronged strategy,” he said.

The company reports its carbon emissions; it has committed to install solar panels throughout its network with the goal of using 50% renewable energy by 2023; committed to being fully carbon neutral by 2030, electrified its fleet of vehicles, used energy-efficient lighting, committed to being a zero-waste facility, among other efforts.

In addition, the company has been adapting its products to be more sustainable. In 2020, it launched Fishbone, a recyclable can carrier that replaces the traditional plastic ring handles used to hold together cans.

“There’s another product that I’m really thrilled about; Amazon is actually buying a lot of them and a lot of our other strategic customers. It’s called the EverTech mailer,” Carter said. “It’s the first-ever paper-fiber- based padded mailer.”

Another key initiative for the company is A New Earth Project, bringing together surfers and the industrial packaging supply chain with the goal of reducing ocean plastic waste.

The organization, started in February, is a collaboration between Carter and surfer, photographer and documentarian Peter King. 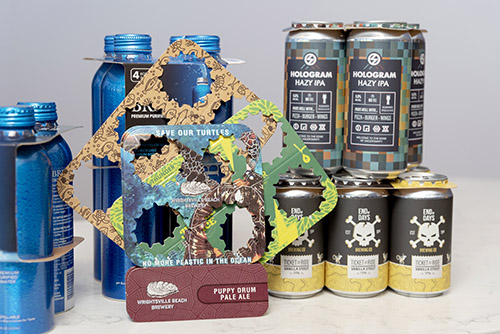 The initiative hopes to help reduce the production of single-use plastics and clean up the oceans. Partnerships are a key component, he said.

“What we’re trying to do is encourage massive collaboration across the entire supply chain,” Carter said.

The role that Atlantic Packaging can have the most impact in is preventing plastic production in the first place.

“If we can move from things like single-use plastic to more fiber-based, paper-fiber based options, that are more recyclable and more quickly biodegradable or compostable, we can really stem the tide of plastic pollution,” he said.

Another aspect of A New Earth Project is a documentary being worked on that will showcase the surfing community as advocates for cleaner oceans.

The film will be a 10-part series slated to air on a streaming platform next year.

Locally, there have been efforts to increase sustainability.

The city of Wilmington adopted a resolution to encourage businesses to become Ocean Friendly Establishments by avoiding plastic waste and providing compostable alternatives to single-use plastics.

“[We’re] just trying to do better, be less trashy and live slightly more right by nature,” Gibbs said. “We had an opportunity to buy our favorite restaurant; cue a full-on family career change. This was going to be an even bigger challenge when at home I was striving to live a zero-waste lifestyle.”

The restaurant composts all food scraps and paper towels from bathrooms, uses compostable bin liners and to-go ware and recycles items with the county and university. In addition, a vegan diet helps reduce ocean waste.

“While the ‘no straw’ movement gained lots of attention, a huge amount of plastic in the ocean is fishing nets, not straws,” she said. “Just in the past 30 years, there’s been a massive decline in the fish populations that are popular for human consumption. Want to save the oceans? Don’t eat the fish.”

Being environmentally friendly does come with certain challenges, which could be improved with more access to recycling and composting.

“Composting is easy and diverts tons of waste from the landfill, but I wish it was more encouraged and accessible to more people,” Gibbs said. “There are issues with food packaging and recycling. Only two of seven types of plastic are recycled in our county facility. No. 5 plastics are widely used in food service containers, but New Hanover County doesn’t process that type right now, so it goes to the landfill.”

While Carter recognizes that there is no silver bullet on how to solve world environmental issues, it’s important to be a voice.

“We’ve gotten ourselves into a position to have a real impact on something that’s really important for all future generations and that can have an impact globally,” Carter said.