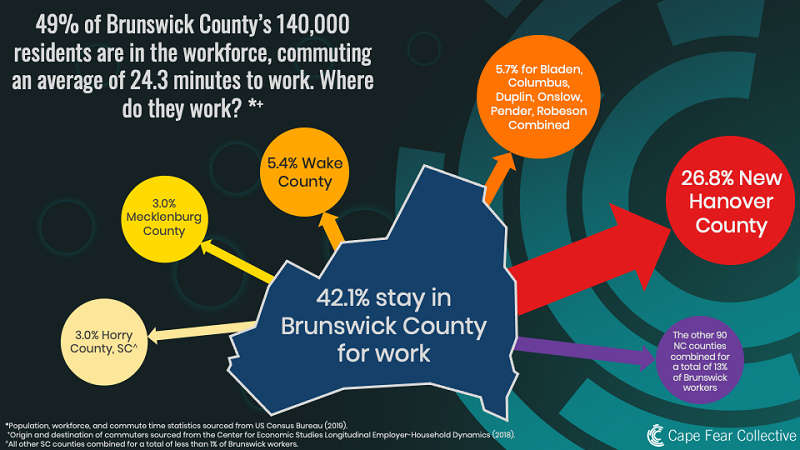 Research conducted by area officials aims to support the rulemaking process that will determine which MSA Brunswick County could fall into for the next decade. (Graphic courtesy of BASE)
In recent findings submitted to the Census Bureau, area officials say Brunswick County has a stronger worker connection to New Hanover County than South Carolina, a fact they say lends support for Brunswick's return to the Wilmington MSA.

Leaders with Business Alliance for a Sound Economy (BASE) and those from UNCW sent letters last week to the federal agency to add input to the rulemaking process that will help guide the new MSA designations. The Wilmington Chamber of Commerce and Cape Fear Collective were also partners in the effort.

BASE and its partners have been focused on the 2020 Census and the MSA designations since Brunswick County was removed from the Wilmington Metropolitan Statistical Area (MSA) and placed into an MSA with Myrtle Beach in 2013, pushing for Brunswick's return.

With the local 2020 Census data anticipated to be released soon, federal officials will start looking at the information and other rules to draw metropolitan lines. Local officials submitted data and their insight as part of the Census Bureau's public comment period on the proposed rules, which concluded May 20.

"In addition to the natural growth, commuting patterns are one of the ways that urban areas are being defined in the 2020 Census," said Tyler Newman, president and CEO of BASE, in an email Monday.

Since the urban area criteria standards were released, BASE has been working with the University of North Carolina Wilmington and local nonprofit Cape Fear Collective to analyze the rules that guide the designations and model how the area's population growth may be impacted by the proposed rules, Newman wrote in his letter to the Census Bureau last week.

In their findings, the organizations point to housing density and commuting patterns as two areas that could support Brunswick County's swing back into the Wilmington MSA.

Household and employment data shows the flow of Brunswick County residents between Brunswick and New Hanover counties for work, Newman said in his letter.

The organizations are also making a recommendation to support adding a rulemaking addition to include ferries, such as the state-funded Southport/Fort-Fisher ferry route, as a commuting connection.

"We feel very strongly that Brunswick County is in the Wilmington MSA and the growth, commuting patterns prove it. Enhancing the 'noncontiguous territory separated by exempted territory' (commuting pattern) provisions to account for water-borne commuters would further refine and enhance the final output and better reflect the situation on the ground," Newman said in his letter.

"As we saw last time, once the MSA delineations are set, it can be many years before an opportunity arises to fix it and make it right," he continued.

In addition to the information sent to the Census Bureau from BASE, UNCW also submitted a letter in an email last week.

Mark Lanier, assistant to UNCW Chancellor Jose Sartarelli, and assistant secretary to the UNCW Board of Trustees, noted that there are connections to the university, as well.

He also noted that population estimates indicate northern Brunswick County growing more quickly than the southern portion of the county.

The university, he said, is in support of Brunswick County returning to the Wilmington MSA.

Lanier also noted the university's support in the proposed rules for increased emphasis on worker flow data, the ferry system being included in commuting patterns and housing density, as well as "proper consideration of connections between state institutions" such as those between Brunswick Community College and UNCW.

"In summary, the connections between Brunswick and New Hanover counties are much stronger than Brunswick’s connections to South Carolina. This lends support to methodologies and rules that will return Brunswick County to the Wilmington MSA," he said.